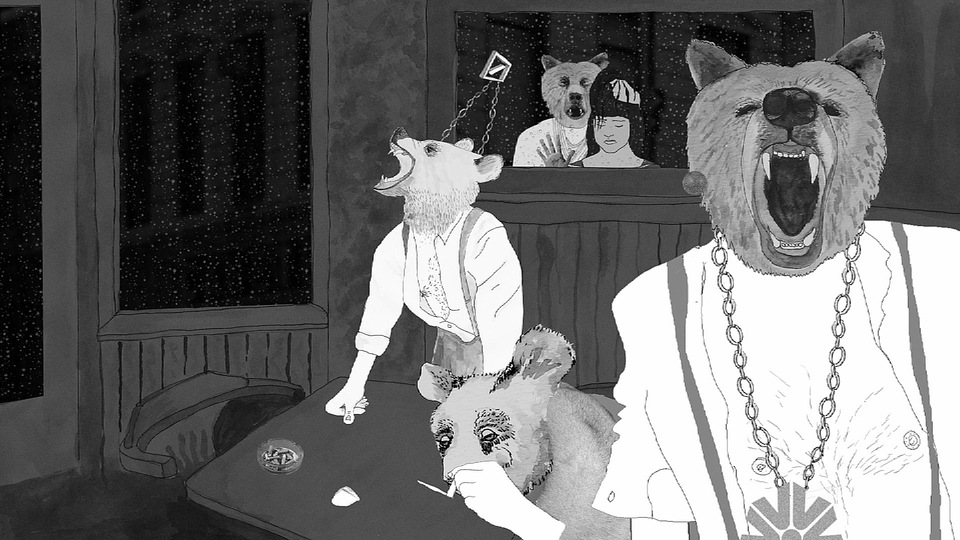 & collect
Mobility - a global phenomenon of the early twenty-first century. Fotogalerie Wien - Association for the Promotion of Art Photography and New Media - is showing artworks concerned with the many aspects of this subject through the cameras of photographic and video artists living and working in Austria. What drives contemporary mobility? Fotogalerie Wien investigates these issues in three part series entitled "Travelling", "Borders", and "Money." All image courtesy of Fotogalerie Wien.
share Mobility
g t l v w f
penccil.com/gallery.php?show=7185 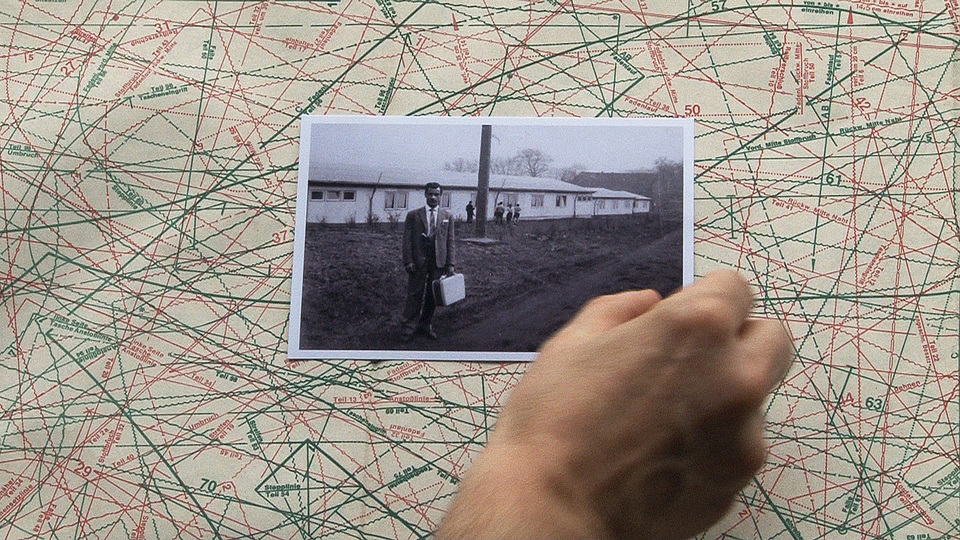 In addition she will show photos from the series "Moira Zoitl trägt einen Anzug von Ahmad Anwari und Yosufi Nagip" along with the original suit itself that the two tailors who emigrated from Kabul to Hamburg tailored for her. In this work measuring the body, cutting the cloth and sewing the suit together become a parable for measuring the distance between home and destination as well as for settling in a new place with its special structures and role ascriptions. Moira Zoitl, still from "Fliehkraft", 2010 HD Video, 14:00 min. 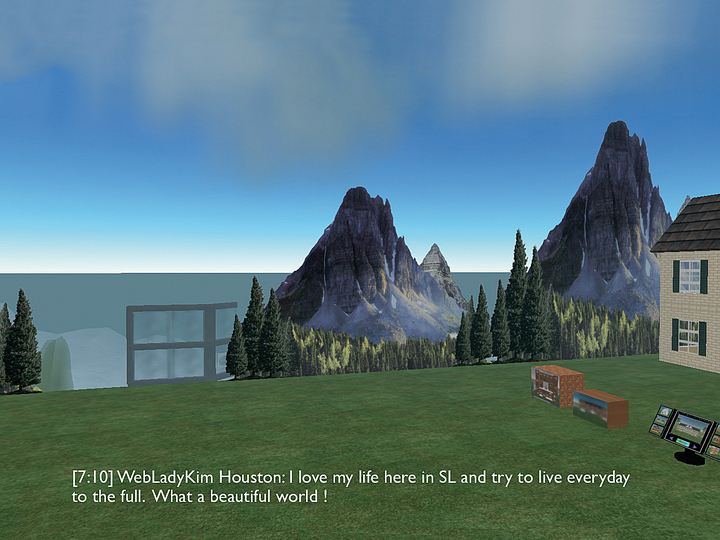 The first exhibition in the series, TRAVELLING, is devoted to various kinds of voluntary movement, the motivating desire to be elsewhere and the settings that were found or created there. Robert F. Hammerstiel, from the photo series "Instant Vacations I", 2007/2008, C-Prints on plexiglass on plexiglass light boxes, each 46 x 61 x 4 cm. 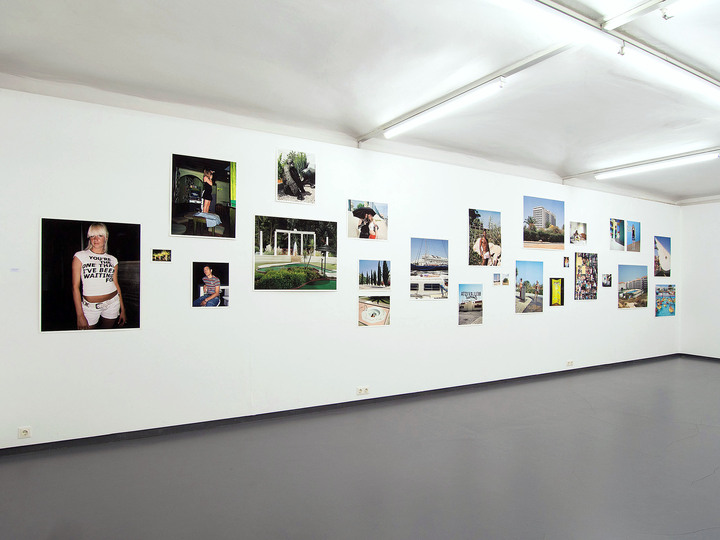 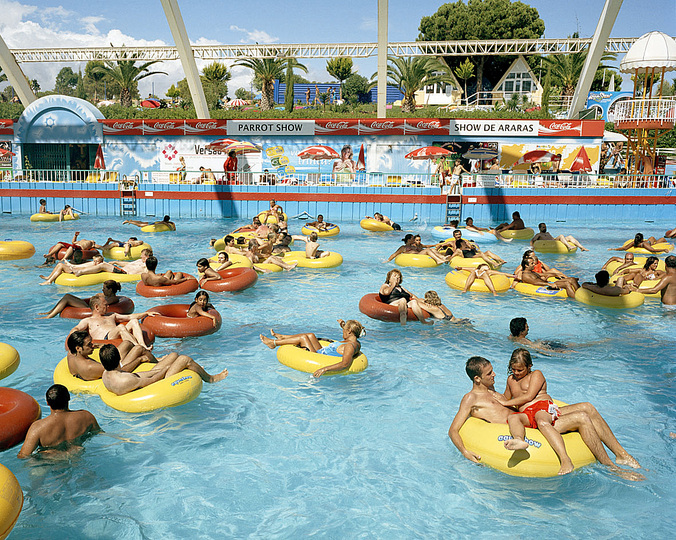 In the case of mass tourism type of “on the move,” all too often traveling means to go to distant realms without actually being there, in fact to even prefer being insulated from local events, swaddled in the cocoon of a custom built resort or adventure holiday strategy. Patricia Almeida, from the Series "PORTOBELLO", 2008, C-Print, 70 x 56 cm. 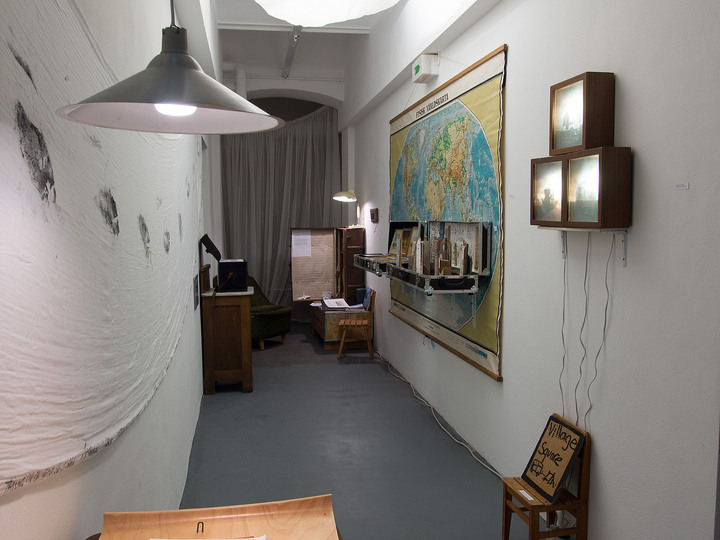 Artists’ trips, the second focal point of this show, are guided by another star. Their travels are often infused with curiosity and a desire to experience what is different and to aesthetically reflect on it in their work. Klaus Mähring, Installationview at Fotogalerie Wien. Photo: Michael Michlmayr. 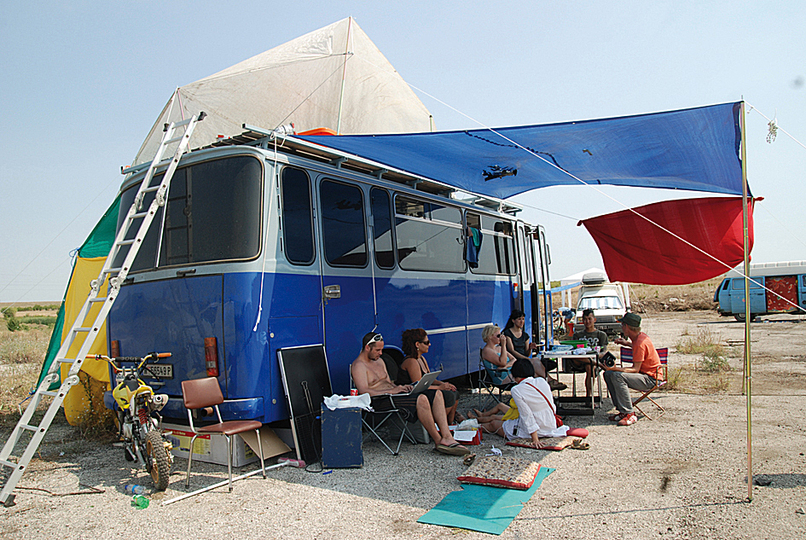 Images - as a characteristic of globalization - have long been most mobile entities that began to ignore all borders whatsoever. Klaus Mähring, from Nomadic Village, "Captain Klaus" / Klaus Maehring, 2009 und 2012.

The third way of moving about is virtual traveling. The excursion into cyberspace where the use of keyboard and mouse releases the imagination from its habitual surroundings even though it still runs into predetermined behavioural patterns. Tim Sharp, "Hearsay", 2013 Wall newspaper, 135 x 312 cm. 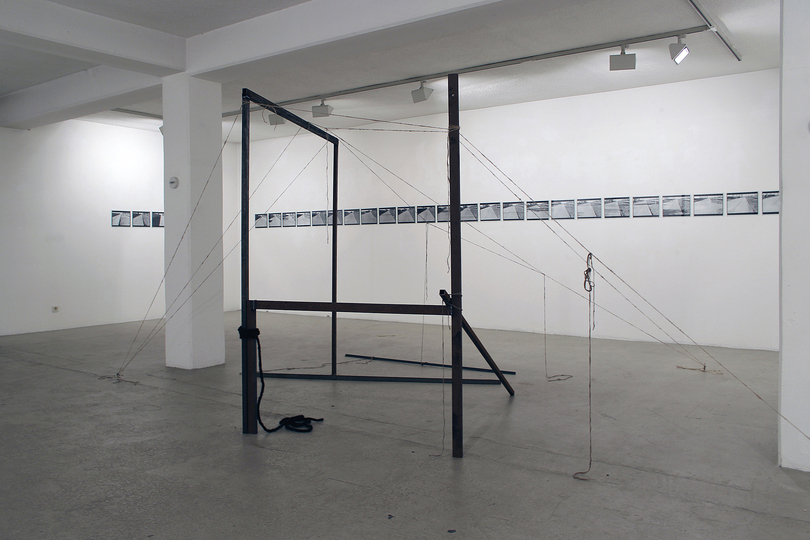 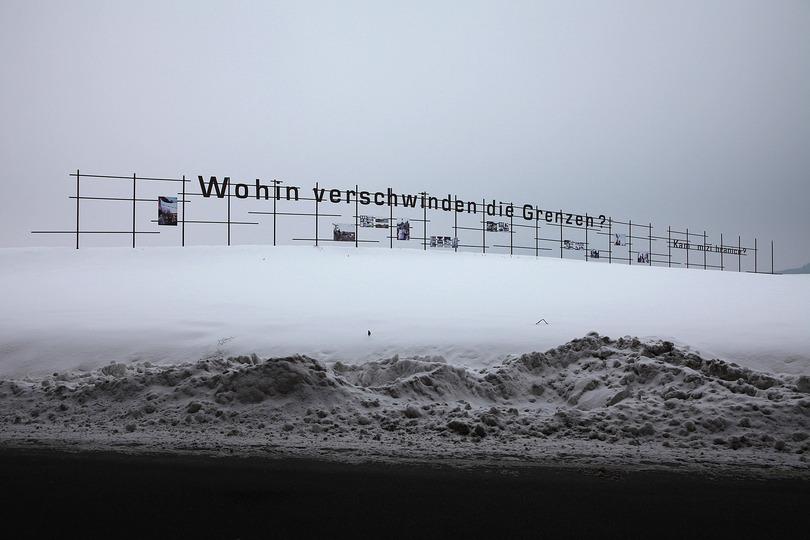 The second exhibition in the series, BORDERS, runs along political dividing lines which are manifested in space but rarely congruent with social and geographical realities “on the ground”. However, the fact that they exist often generates new living situations and economic relationships. The complexity of the global phenomena of state borders is equally reflected in the microcosms of border zones. The vision of a “global village” condenses down into the regulation of border drawing—with its nationally significant and definitive architecture—and its bureaucratic implementation: pre-established criteria of in- and exclusion determine here the possibilities of physical mobility. The works in this show do not only tell of those who cross borders temporarily, but of those who attempt to overcome them once and for all too. Iris Andraschek & Hubert Lobnig, from "Wohin verschwinden die Grenzen? Kam mizí hranice?", 2009. 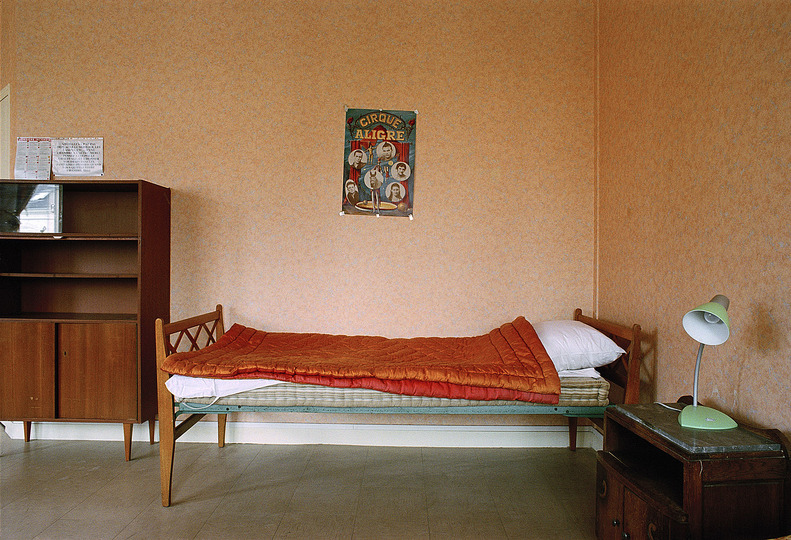 In his photo series Chambres [Quarters](2005), Taysir Batniji presents views of temporary quarters for Renault factory employees in France. These are furnished in a way that is extremely functional and also sparse. These short to middle term residences offer shelter and lodgings and thus stand for the transitory spaces of the international diaspora, in this case voluntary (and paid) migration. They also act as proxies for the many transitional spaces that refugees, people searching for a better life or simply for work often encounter. Taysir Batniji, from the series "Chambres", 2005 C-Prints, 28,8 x 42 cm. 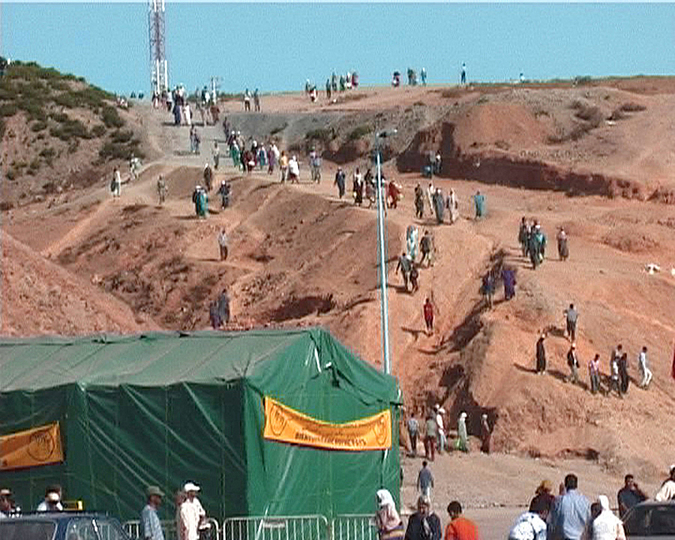 Europlex (2003) shows the Ceuta border and its daily trade between the Spanish enclave Ceuta and Morocco. Ursula Biemann, still from "Europlex", 2003, DVD, 20:00 min. 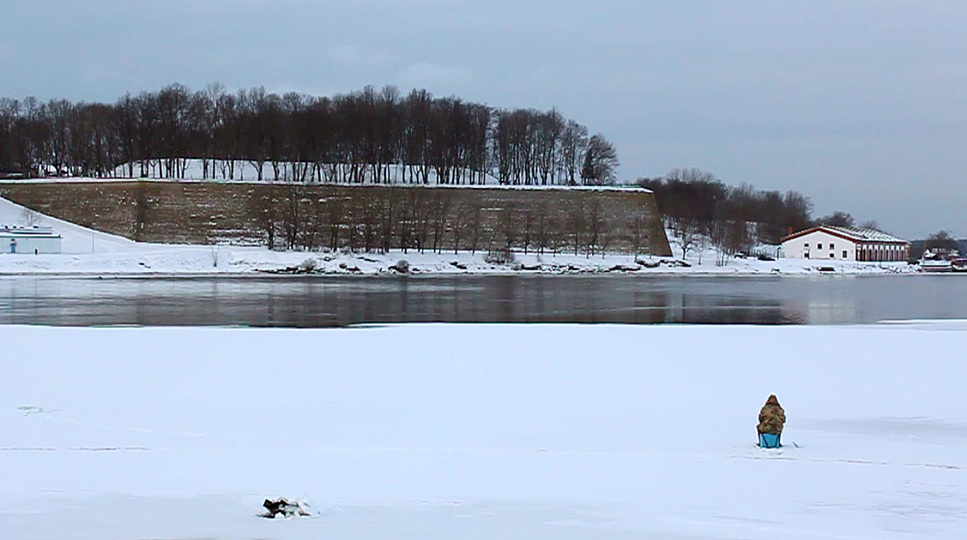 The video Winter (2013) by Eva Engelbert was made in collaboration with sociologist Alena Pfoser. It shows the paradoxes of a “twinned city” that is divided by a significant political border. It is not only a river that runs between Schengen and the Russian Federation, between Navra and Ivangorod, it also traces the hardship involved in overcoming an abstract entity in daily life. One inhabitant makes the point by telling of the difficulties she faces when visiting her husband on the other side of the river. On the other hand others cash in on it by smuggling goods past customs—even if it is only tea hidden in a pair of boots that are allegedly in need of immediate repair. Eva Engelbert & Alena Pfoser, still from "Winter", 2013 HD-Video, 9:50 min. 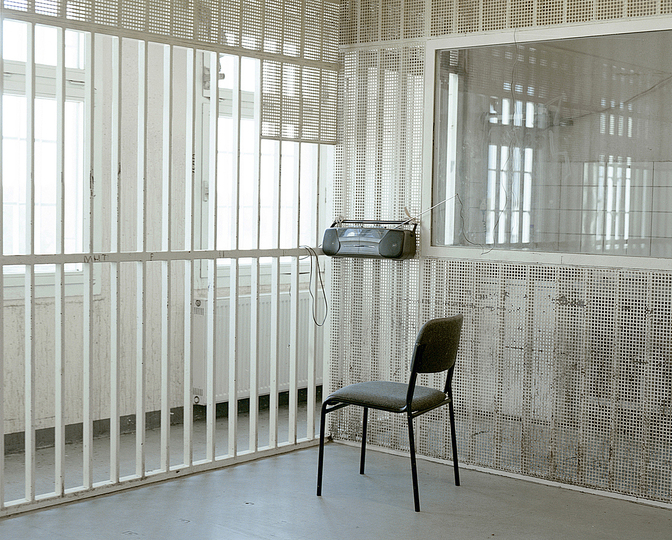 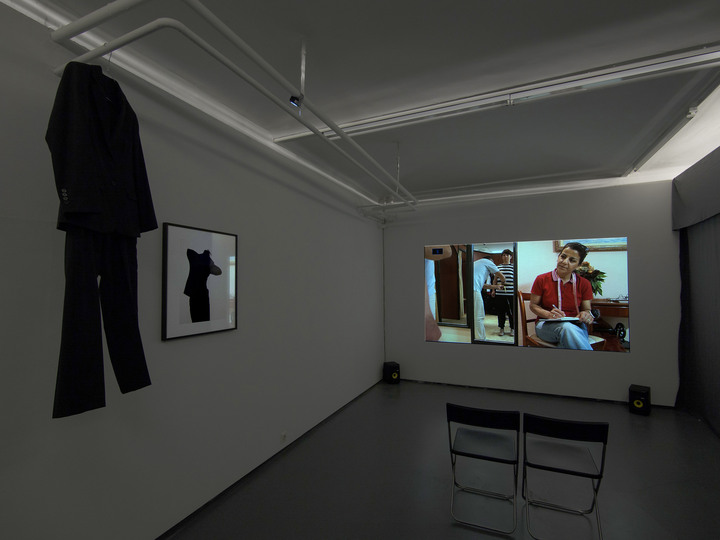 Moira Zoitl is presenting an installation work in which the video, "Fliehkraft" (2010), together with photographs she found in the web of 1960s guest workers in the classical suits of the time form the central core. Exhibition view at Fotogalerie Wien. Photo: Michael Michlmayr. 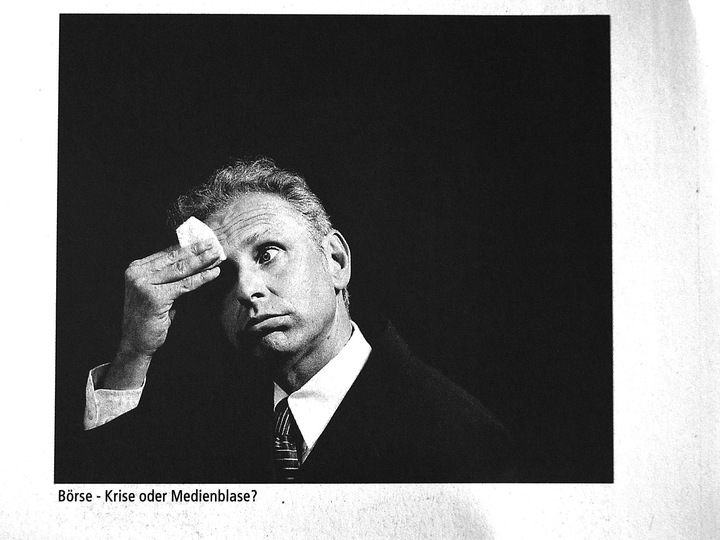 After the topics of “Travelling” and “Borders”, “Money” is the third and final Fotogalerie Wien on MOBILITY. It deals with the virtual and volatile influences of globalized markets in goods and financial services and their consequences for the real world. G.R.A.M. "NixCheckCashing", 2012 6-parts, each two newspaper prints in one frame, 41,5 x 29,5 cm. 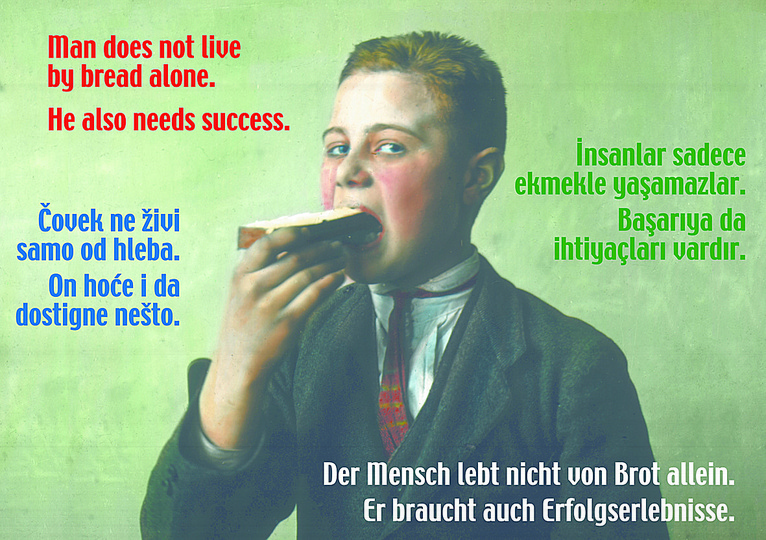 The works of Helmut & Johanna Kandl engage critically with the postmodern working situation. Using colored glass diapositives from the interwar years, they make an art intervention by employing affirmative slogans from the repertoire of neoliberal “newspeak” in a cynical way. This makes the divergence between the promise of appropriate payment for performance and the real market situation visible. Helmut & Johanna Kandl, from "Your Way to the Top", 2001/2013, C-Prints, variable sizes.

In addition to research-based works, documentation and critical analysis of the machinations of the powerful, the show is supplemented by works that are based on an emotional approach. Here, the topical and worldwide relevant subjects of the financial and economic crisis (the bear market), the property crash and the corruption and abuses of power are made visible in a number of different ways. The linkage between exploitation and profit skimming, the widening gap between rich and poor and the powerlessness and existential threat experienced by the broad masses as a result of the crisis are all put up for discussion. Zanny Begg and Oliver Ressler, Film stills from "The Bull Laid Bear", 2012 HD, 16:9, 24:00 min.