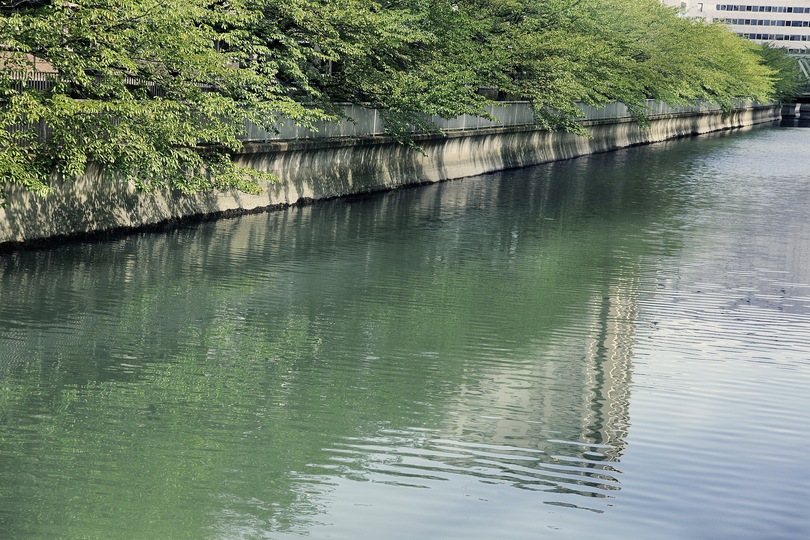 Designing a 56 sqm bistro in Tokyo 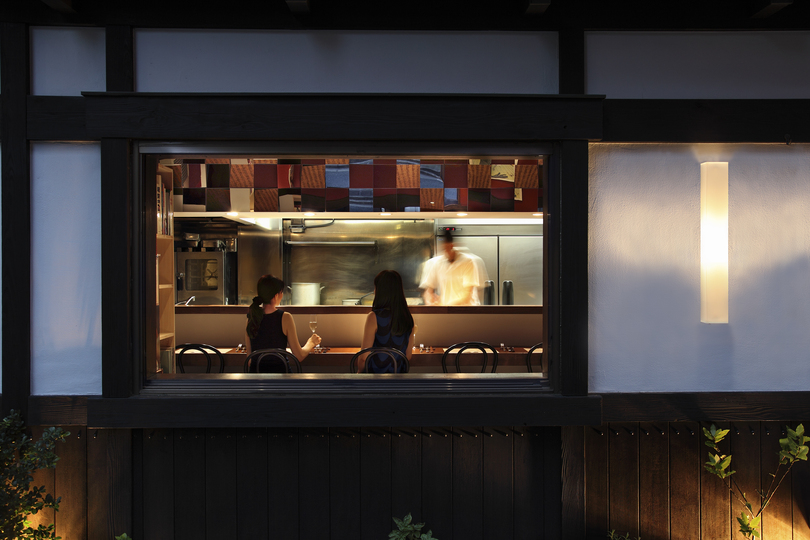 One day in April, I received a phone call from a friend I had often spent time with back in Paris, from whom I had not heard in a while. We spent a short while catching up—"How are you these days? Good?" "Yeah, I’m keeping pretty busy." Then, all of a sudden, he came out with, "Listen, I’m opening a bistro where I’ll be the chef, so I was wondering if you’d design it. You will, won’t you?" I had been expecting an invitation to have a drink or something, and was momentarily at a loss. Before I had a chance to answer, he continued, "I’ve picked out a place in Monzen-nakacho, so come out and have a look." And with that, our (extremely one-sided) conversation was at an end. 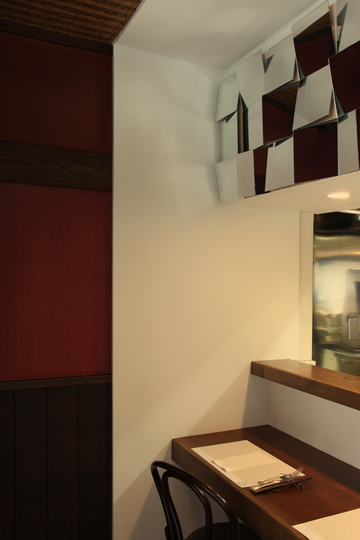 A few days later. "You could do well opening a bistro here," I thought, when I arrived to check out the location. From a designer’s point of view, I could see it working for the type of bistro my friend had in mind, with mainly counter seating, and I told him so. "Then it’s settled. Let’s draw up a contract and get to making some plans." My friend and I were both new to the restaurant business. We had a restricted budget and construction timetable, but that’s how our impulsive—or, rather, optimistic—project began. 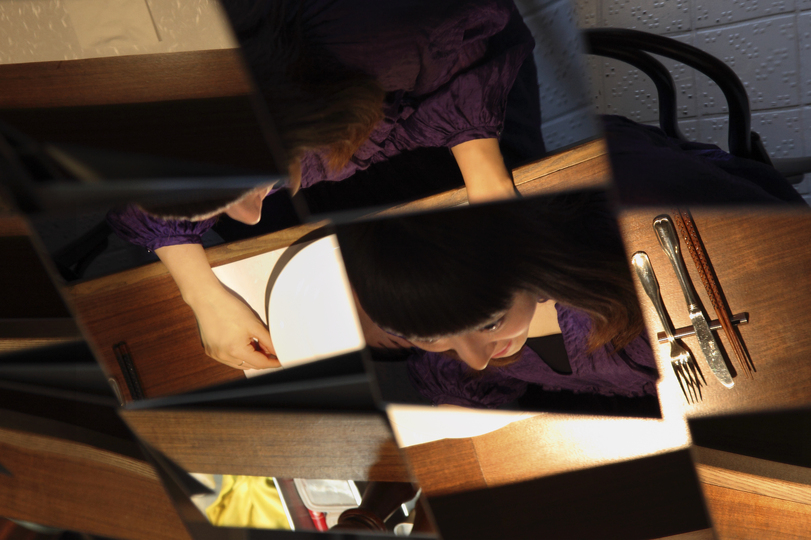 As for the design, the idea was to take over an existing building that had operated as a small restaurant for close to 30 years, and renovate the facade. Just because the restaurant would serve French cuisine, we didn’t feel the interior and exterior decorating had to be French. However, if we couldn’t change the facade, the new restaurant we were going to the trouble of opening wouldn’t be very eye-catching from the outside, and it would be difficult to get ourselves noticed by people in the neighborhood. We decided, therefore, that we needed to appeal to passersby by emphasizing the contrast between the facade and the interior which we would be renovating (in such a way that people would realize a new restaurant had been opened). 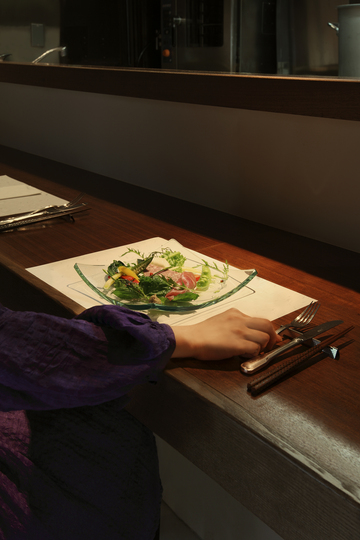 There was another issue, however. Due to budget constraints, it was unrealistic to aim to tinker with all aspects of the décor to achieve an entirely new design. We decided, therefore, to split the space in half lengthwise, leaving the side invisible to the outside as it was, and to renovate the part that could be seen from the outside, including the kitchen, counter, and the remaining space. That would give us an easy two-part organization to the space as well as a simple distribution of cost. 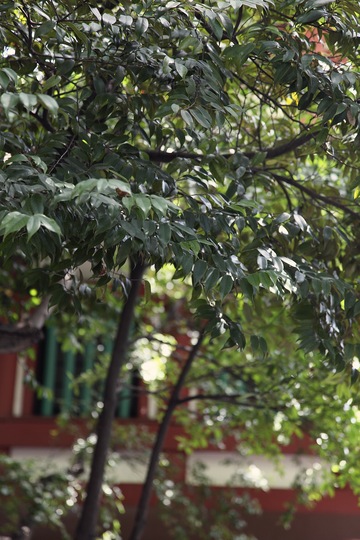 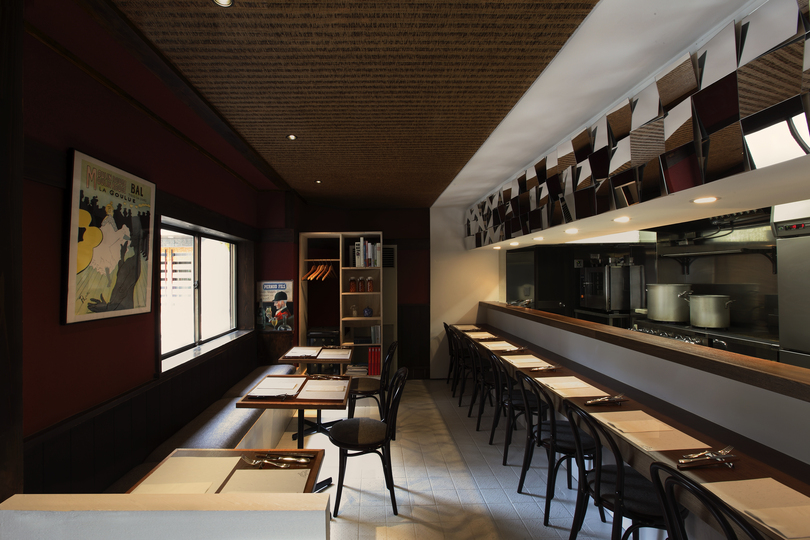 When we asked ourselves what was most important to French cuisine, we decided it was definitely the consideration and choice of compatible combinations of food, wine and cheese. Even simple items should complement each other to mutually enhance their individual flavors. This is often referred to in French as a marriage, and we wondered if we couldn’t incorporate the same kind of relationship and effect into the architecture. 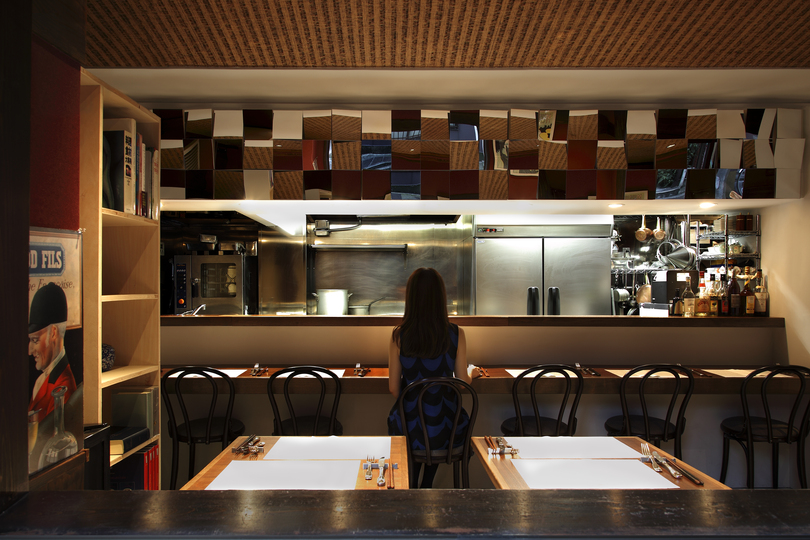 Luckily (?) the cabinet doors above the counter needed to be replaced. We covered the new ones in acrylic mirrors (12 to each door), tilted at various angles, so that people outside the restaurant would see a mosaic of the customers, tables, food, and unchanged walls and ceiling inside the store, while the customers inside would see fragments of the outside. The exterior can be seen from inside, and the interior from outside, in other words, as the area left unchanged is reflected in the renovated section, the space divided in two is simultaneously fragmented and recombined. Charming dresses, beautifully served food, crimson wine, effervescent champagne—this space transcends its partitioned structure, breaking its elements apart and then melting them together, not possessing a solid form. One could see it as the confusion resulting from an incompatibility of subject and meaning layered over one another. Architecture must of necessity deal with the concrete materials, colors, dimensions and weights of physical objects. But I would like to create something abstract with them, something rich and mellow.