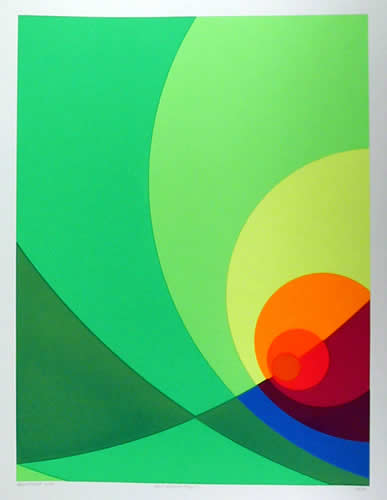 & collect
Intense hues evenly inhabit the circular forms: clear orange, a lush green, a glowing violet and other highly saturated colors. They seem to be handsome, uncomplicated paintings and indeed the sense of handsomeness persists. As one begins to compare the twenty-six large acrylic paintings, marked differences assert themselves and the works become increasingly complex. In each painting, the main axis shifts slightly and each circle sequentially becomes a different color. ... Suddenly, the circular format seems to become spherical and the viewer discovers spatial progressions while also responding to an absolutely flat color shape surface. Simultaneously, color and form appear to project from the canvas like a cone or, conversely, to deeply recede, yet at the same time a flat rhythm is established across the surface of the canvas. Each painting then begins to evidence itself as a complete universe ... and achieves a fresco look so that the circular color form image does not separate from its square white background and become an object. Each color area contains four to six coats of paint and a single canvas may hold a load of seven quarts of paint. Aach refers to these works as "sequential serialized color form painting" and the show itself is called Precession of the Equinox. The latter title refers to the tendency of the the paintings to have a color expansion (or color pull) towards the west, just as the earth itself has a westward drift and an eccentric off-center equinox because of its particular shape. While thoroughly programmed, individually and together, Aach´s paintings do not elicit a computerized response. It is astonishing that they eventually reveal themselves as systems because the viewer is instantly caught up in color activity. Remnants of the artist´s pencil drawings remain at the edges of the paintings, as if to underscore the personal working process that lies behind the programming. As we expect accelerated and intensive color experimentation during the next decade, Aach is indeed a pioneer.
from Noel Frackman in review of Precession of the Equinoxes at Martha Jackson Gallery, New York, in Arts Magazine, Sept. 1974, p.74.

Herb Aach (1923–1985) was an American painter and writer. Aach´s painting style is known for its intense and well placed pigmentation, which stemmed from his deep interest in color theory and color relationships. Herb Aach was born in Cologne, Germany in 1923. He studied under German expressionist painter Ludwig Meidner. Nazi persecution caused his family to flee, and in 1938 he arrived in New York City. In 1942 he enlisted in the United States Army and a year later he became a U.S. citizen. After serving during World War II, in Kassel, Germany, he returned to New York in 1946 where he studied under John Ferren and Rufino Tamayo at the Brooklyn Museum Art School. In 1948 he moved, with his new wife, to Mexico City where he continued his fine art studies at Escuela de Pintura y Escultura.
share Herb Aach: Color Theory
g t l v w f
penccil.com/gallery.php?show=9701 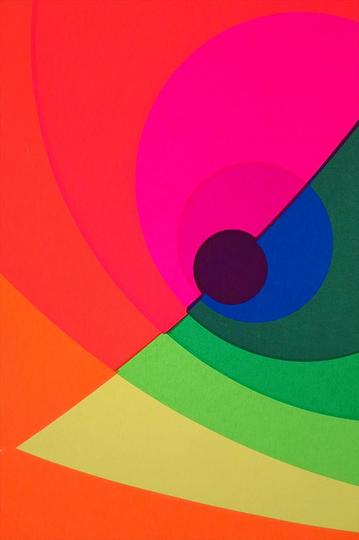 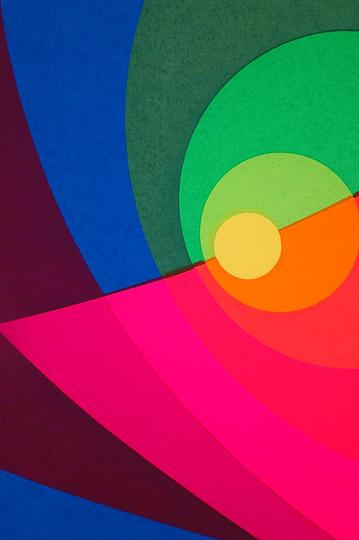 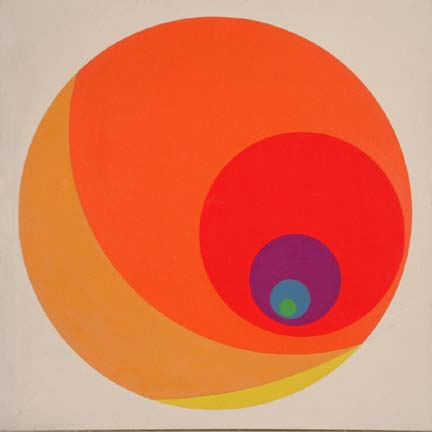 I'm continuing to work in projections and expansions. It seems I can no longer do this by intuition, by rational thought or by analysis. Have to see it all. Trial and error is no longer good enough. Apparently there are no shortcuts. To see this, they must be realized, executed. This has become evident to me through a series of color sketches, Number 1540. Circular projections and expansions in the round. I thought I'd covered maximum variability only to find when I worked to a larger surface I'd omitted at least 50% of potential. Seems there's no end to this vein. In this, I'm probably akin to Albers, though his speculations are too thin for me. 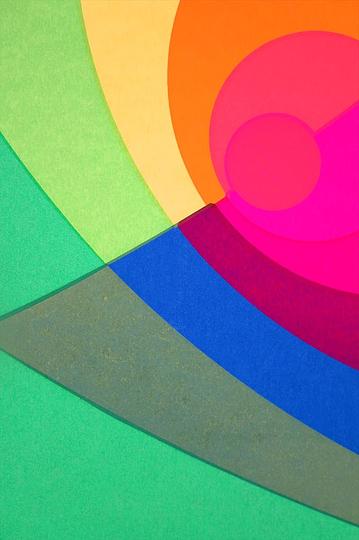 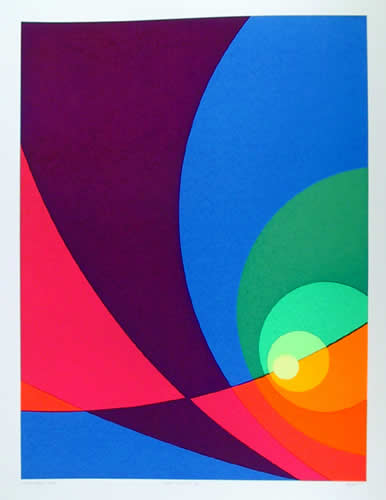 I've moved into the realm of what I call 'impersonal' color. 'Objective' is probably more fitting than 'impersonal'. But 'objective" is so often juxtaposed with that term 'subjective'-an abhorrent dichotomy that runs headlong into psychological bottlenecks. Probably impossible to preclude that kind of association; if anything the general tendency is to elevate it. Though at best, at least here, it's merely incidental. Perhaps 'nonpersonal' color would be better. That suggests general rather than specific color. To me, Giotto's color was 'nonpersonal' (at the Arena Chapel and Santa Coce). Really no taste canon. Dry, matter-of-fact, but not local. 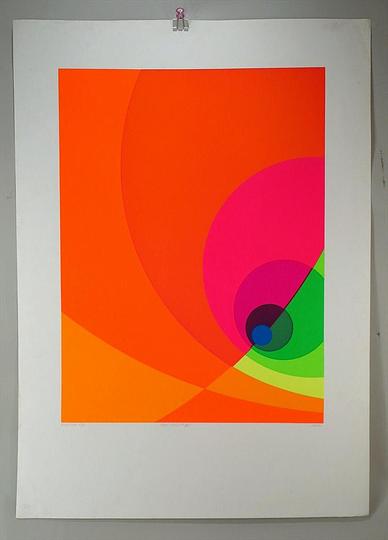 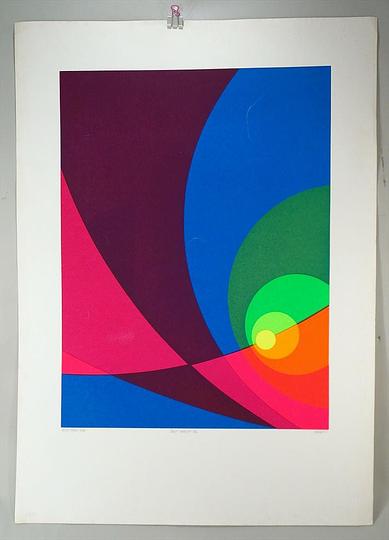 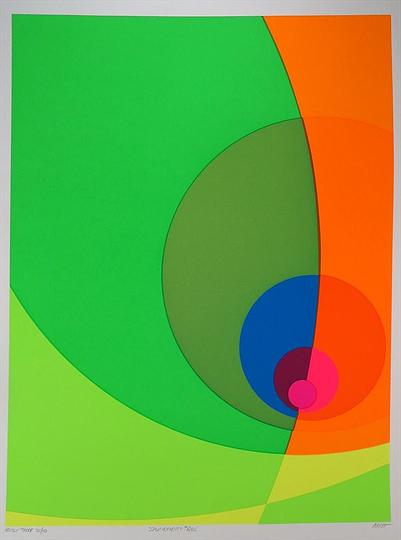 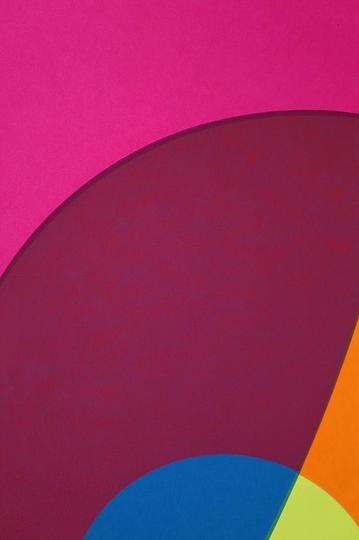 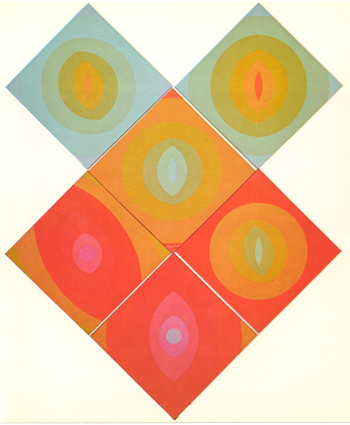 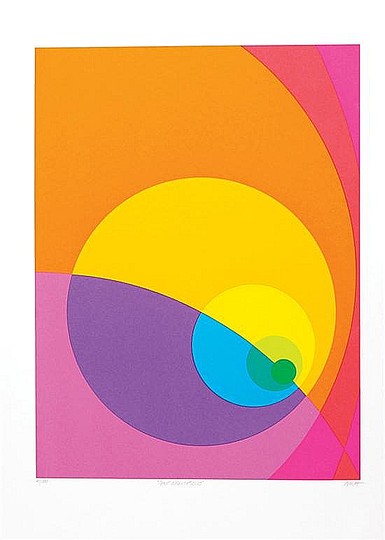 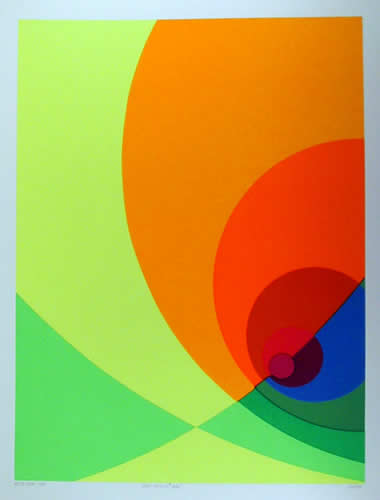 Here's another observation that I can't as yet explain. The first five hues, from the greenish/yellow through orange, seem to make a more 'complete?!' color statement than do the seven. This is hard to see now. Eye accommodation? Are certain laws operational? Limitations in regard to the general effectiveness or perception ranges when using analogous progressions? Or does it now appear incomplete, an insufficient span? Is it related to cone perception, say how many key in? I sure as hell don't know. 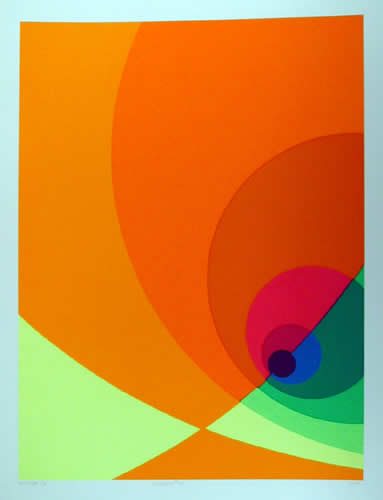 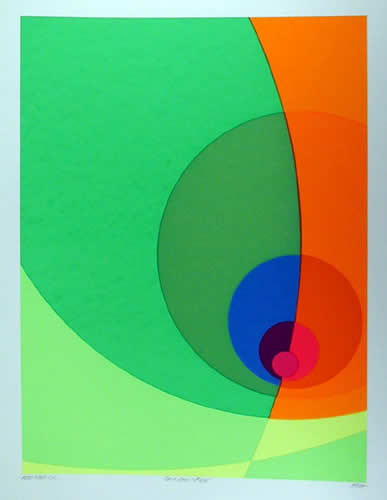 I used 7 hues in Number 1540, going from a small pale greenish/yellow to yellow, yellow/orange, orange/yellow, orange, red/orange then to red-dark, large. Working from light to dark, the bending slightly bunched together and spreading out with larger steps. In other words acceleration toward the periphery. Still using fluorescent pigments, their strength is still significant to me. I'd hoped for relative equal intensity. No such luck. The orange/yellow is weak and I had to introduce white to raise its value. Too close to the orange, otherwise. Also too red, I had to add yellow. Wherever these pigments are not close enough hue-wise they break too far in intermixing and diminish intensity. Normally, compared to conventional pigments, this orange/yellow would really be high. Here it almost acts like a warm yellow ochre. Spatially, it takes away from the across surface motion. Of course, this is less than desirable, penetrating when least desirable. Still operative though. The painting forces the viewer out of a preconceived path by acting nearly as an eccentric top. I seem to be working on the very act of perceiving. I simply must learn to understand pigment limitations and avoid them. Can't bunch together on the warm yellows. 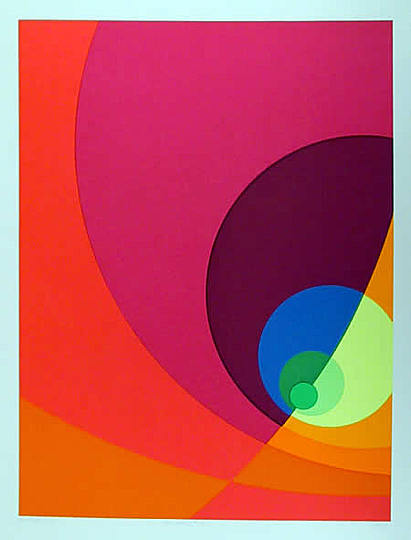 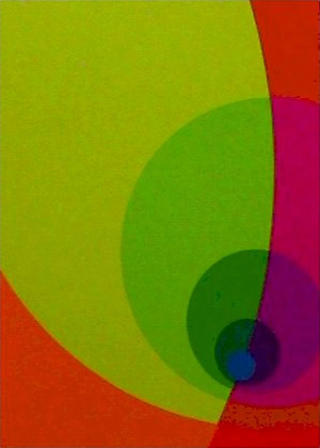 Another thing I don't understand. Of course, my whole series of equal middle value paintings suffered here and there from loss of intensity and therefore spatial disruption. I find for my eyes that higher intensity in bright light tends to mislead the reading as a darker value. I'll be damned that when these paintings are read in dim light, dawn or dusk, the more intense areas do indeed appear darker. Somewhere this is related to the use of white. In other words, to lighten darker pigments requires white as addition. So do they reflect more light in dim light? Is it ultra violet absorbtion or reflection? Or is less light reflected? The light absorbed when less white pigment is present. After all is said and done, Number 1540, based on drawing 17R is a knocker. 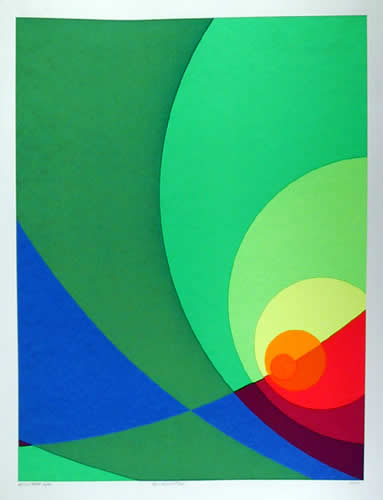 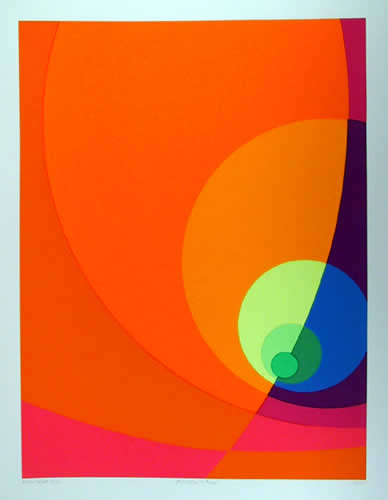 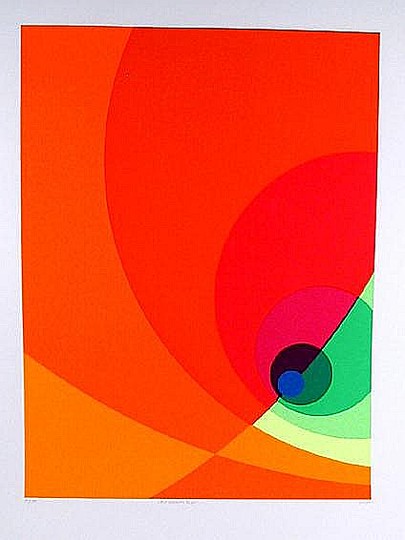 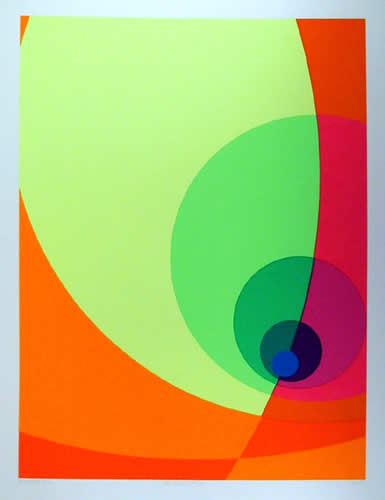 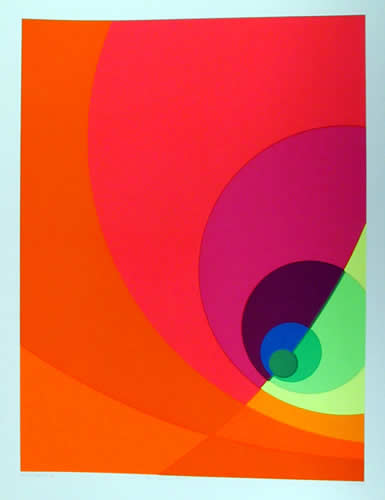