Diego Rodriguez de Silva y Velázquez (1599-1660) was born in Seville. His precocious talent soon brought him to the attention of King Philipp IV, who made the twenty-four-year-old artist his court painter, a position Velázquez retained until the end of his life.

Producing official portraits of the king and his family was among the foremost duties of every court painter, but Velázquez extended this to include different members of the court, developing such a modern, psychologically perceptive view of his sitters that his compositions continue to fascinate all who see them.

The Kunsthistorisches Museum is hosting the first-ever monograph exhibition in a German-speaking country dedicated to Diego Velázquez until February 15th, 2015. Comprising many of his seminal works, the exhibition offers a comprehensive survey of the Spanish court painter’s complex oeuvre.

As a result of the dynastic and political connections between the Habsburg rulers in Madrid and Vienna, the Kunsthistorisches Museum holds outstanding portraits by Velázquez, among them charming likenesses of the Spanish infantas. Images courtesy: Kunsthistorisches Museum, Vienna.
share Diego Velázquez
g t l v w f
penccil.com/gallery.php?show=9673 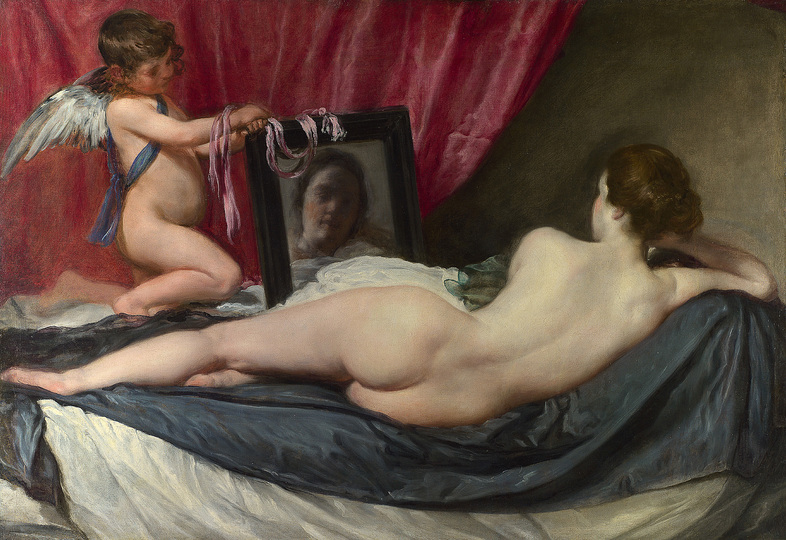 "The Rokeby Venus" is perhaps the most beautiful nude back ever painted in the history of European painting. Diego Velázquez, Venus at her Toilet (The Rokeby Venus), 1647-51, 122,5 x 177 cm © The National Gallery, London 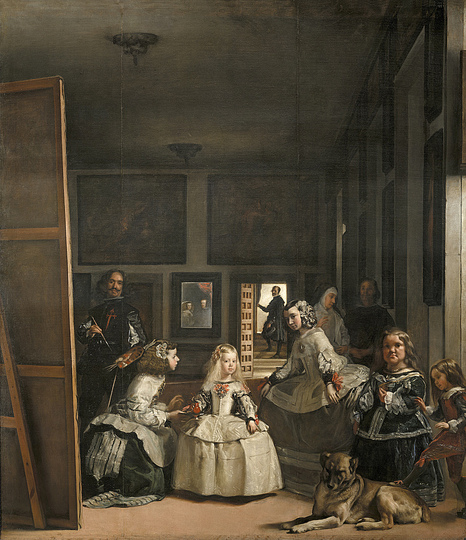 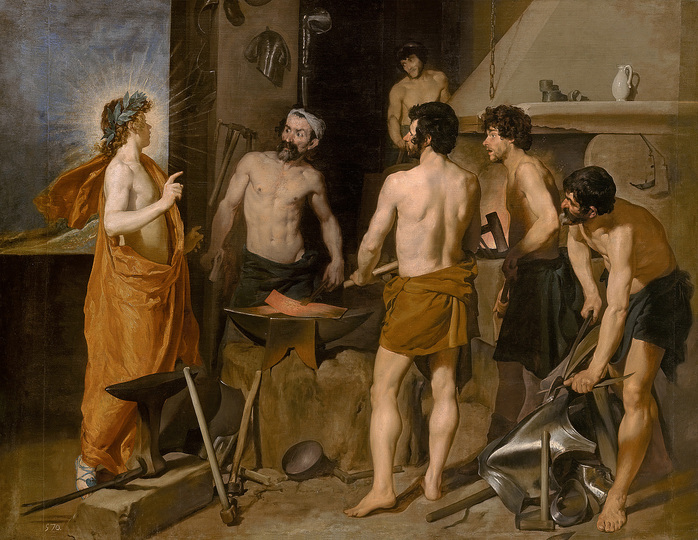 Velázquez painted a number of scenes from Greek & Roman myths. Ovid records that Venus cheated on her husband Vulcan with Mars. Here, Velázquez depicts the moment when Apollo enters Vulcan’s forge to tell him of his wife’s infidelity. Apollo’s ideal youthful beauty is set off by the realistic rendering of the divine blacksmith and his assistants. These men are used to hard labour, their gestures and expressions are extremely life-like. At the same time their semi-nude bodies are informed by classical sculpture. Diego Velázquez, Vulcan’s Forge, 1630, Oil on canvas, 223 x 290 cm © Madrid, Museo Nacional del Prado 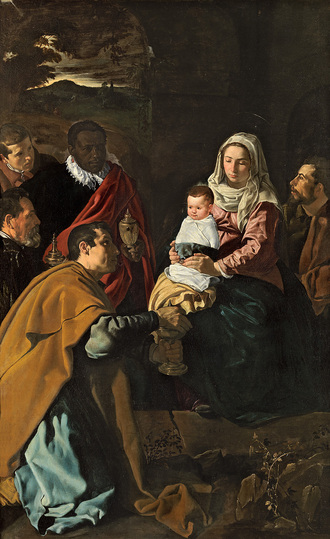 When Velázquez painted this Adoration of the Magi it was his largest and most ambitious composition to date. It was probably commissioned by the Jesuits in Seville, with whom the artist’s teacher and father-in-law maintained excellent relations. The protagonists were clearly painted from the life: the aged king on the left is a portrait of Pacheco, and both the king in the foreground and St. Joseph are modelled on Velázquez’ himself. Diego Velázquez, The Adoration of the Magi, 1619, 203 x 125 cm © Photographic Archive, Museo Nacional del Prado, Madrid 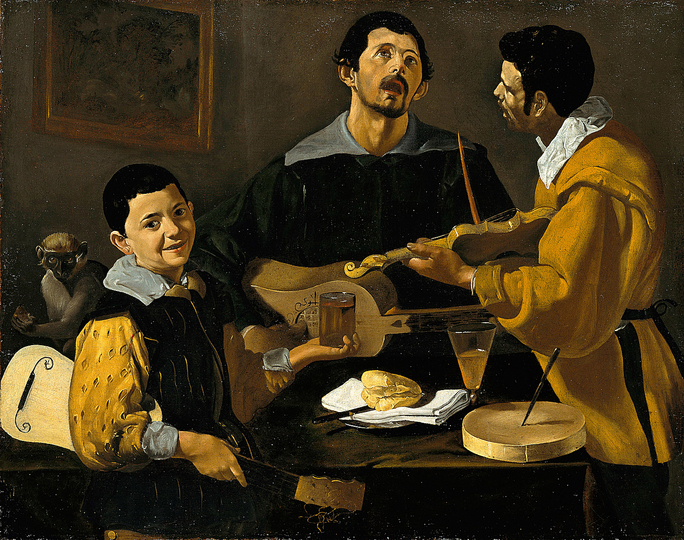 "Three Musicians" is regarded as the artist’s earliest extant work in the genre then known as bodegones (cookshops or inns). Velázquez did not invent this genre, but clearly aware of Caravaggio’s work. Diego Velázquez, Three Musicians, c. 1617–1618, Oil on canvas, Berlin, Staatliche Museen, Gemäldegalerie 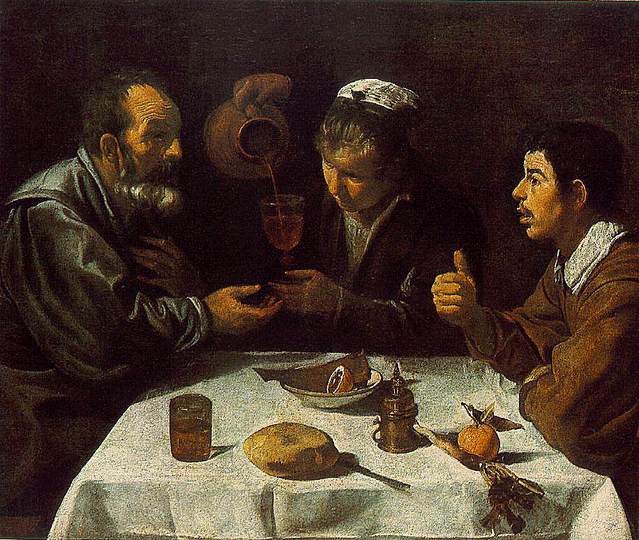 This bodegones painting is believed to be a collaboration of Velazquez and one of his atelier assistants. Diego Velázquez, Peasants at table (El Almuerzo) c. 1618–1620, Oil on canvas, 96 x 112 cm. Budapest, Szépmu" vészeti Múzeum

Many regard this as Velázquez’ best work from his early years in Seville, and it is undoubtedly the most important of his bodegones. Diego Velázquez, The Waterseller, c. 1620-22, 106,7 x 81 cm. London, Apsley House, The Wellington Museum © English Heritage 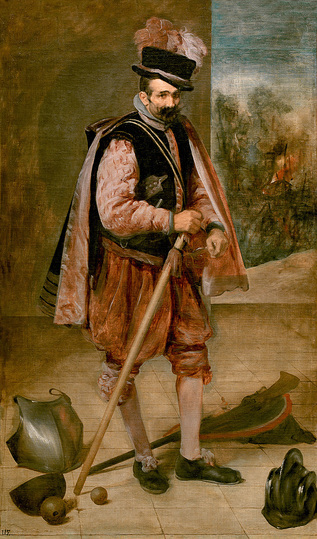 Don't be fooled by glittering armours and weapons by the model's feet and be led to think that this man is a military hero. Don Juan de Austria was a jester at the court of King Philip IV. Velázquez liked to cross boundaries between reality and illusion and to play with paradoxes. Diego Velázquez, Don Juan de Austria, c. 1633, Oil on canvas, 210 x 123 cm © Madrid, Museo Nacional del Prado 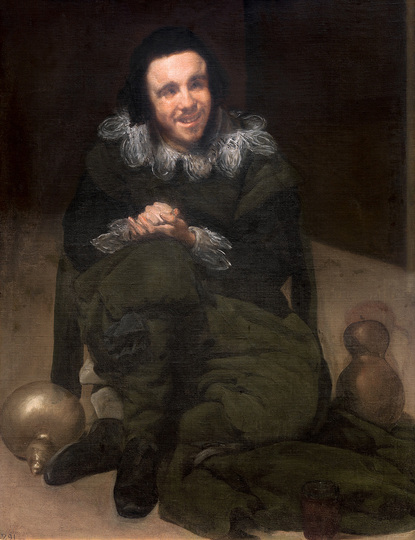 The portraits of dwarfs and buffoons are among the most striking paintings in Velázquez’ oeuvre. The sitters’ physical and psychological abnormalities formed an established counter-world to the highly structured and hierarchical world of the court. Diego Velázquez, The Buffoon Juan de Calabazas (Calabacillas), c. 1638, Oil on canvas, 106 x 83 cm © Madrid, Museo Nacional del Prado 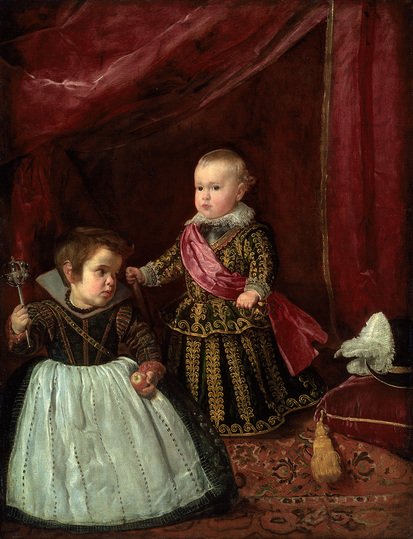 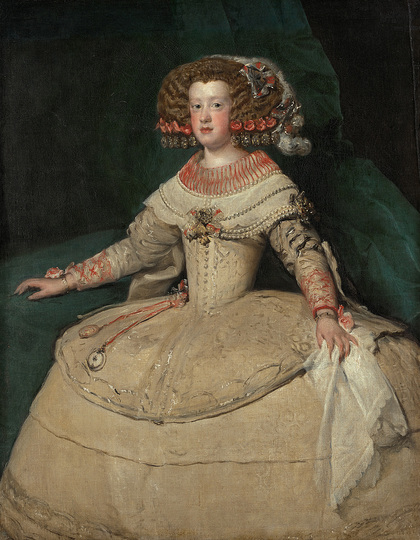 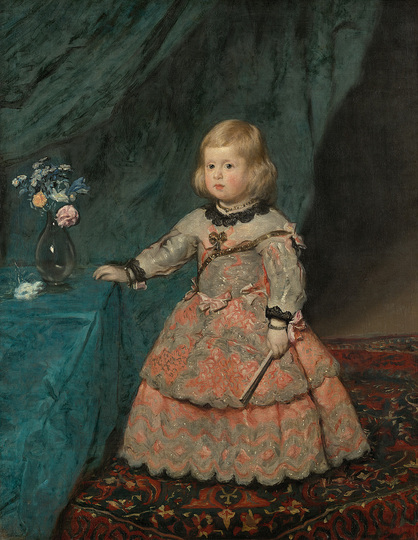 In the 17th century the Spanish Habsburgs sent portraits of their children to their Habsburg cousins in Vienna. Among the most beautiful are the three portraits by Velázquez depicting Infanta Margarita aged two, aged five (in a white dress) and aged eight (in a blue dress). She was the daughter of Philip IV and his second wife Mariana of Austria. Diego Velázquez, Infanta Margarita (1651–1673) in a Pink Dress, 1654, Oil on canvas, 128,5 x 100 cm © Vienna,Kunsthistorisches Museum 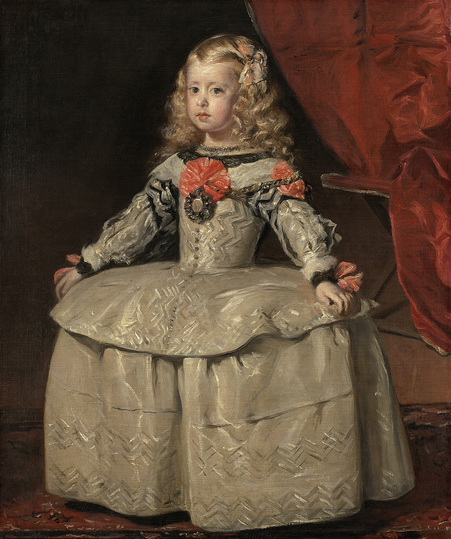 This picture of the five-year-old princess was also sent to her grandfather Emperor Ferdinand III in Vienna. She is wearing the white court robe in which Velázquez depicted her in his celebrated painting »Las Meninas«, which is now in the Prado in Madrid. Diego Velázquez, Infanta Margarita (1651–1673) in a White Dress, c. 1656, Oil on canvas, 105 cm x 88 cm © Vienna, Kunsthistorisches Museum 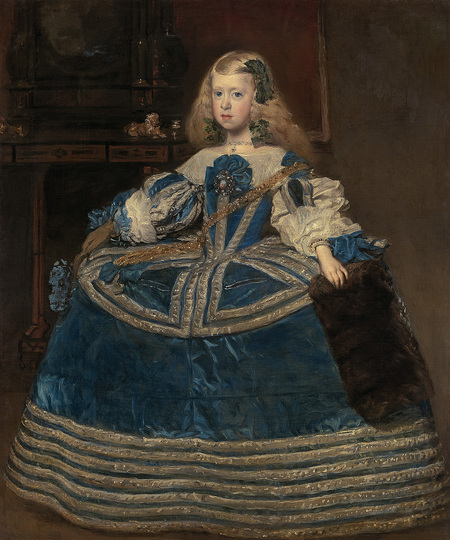 It was his final portrait of the now eight-year-old princess. Together with the por- trait of her brother Felipe Prospero it was sent to Emperor Leopold I in Vienna in 1659. Diego Velázquez, The Infanta Margarita in a blue dress, 1659, 126 x 106 cm © KHM 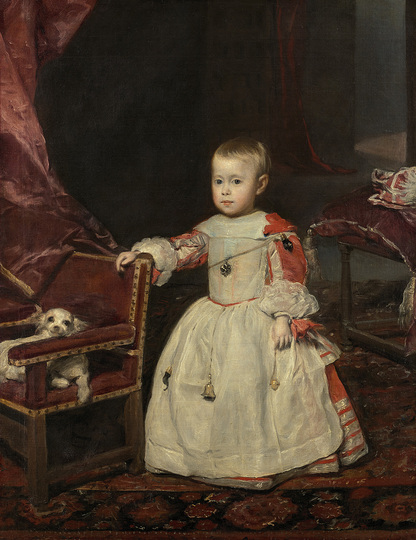 In 1657 Queen Mariana (no. 35), the second wife (and niece) of King Philip IV, gave birth to the long-awaited heir to the Spanish crown. In 1659 this painting and the portrait of his sister Margarita in a blue dress were sent to Emperor Leopold I in Vienna. Felipe Prospero was a sickly child. This moving portrait is among Velázquez’ last and greatest works. He shows us both the crown prince and the ailing child, draped with amulets and good-luck-charms. Diego Velázquez, The Infante Felipe Prospero, 1659, Oil on canvas, 128 x 99 cm © Vienna, Kunsthistorisches Museum

The excellent connections of Francisco Pacheco, Velázquez’ father-in-law, helped the young artist to establish himself in Madrid in 1623. After the king had seen Velázquez’ portrait of his prime minister, the Conde Duque de Oli- vares, Philip IV decided to sit for him too. A number of portraits connected to Velázquez have survived from this time, both full-length and half-length compositions. King Philip IV of Spain painted in the Workshop of Diego Velázquez, c. 1653–1656/59, Oil on canvas, 47 x 37,5 cm © Vienna, Kunsthistorisches Museum

A native of Córdoba, the poet Luis de Góngora (1571–1627) was one of the leaders of Madrid’s intellectual elite. Velázquez made the most of his chance to portray this celebrated man-of-letters. Diego Velázquez, Don Luis de Góngora, 1622, Oil on canvas, 50 x 40 cm © Boston, Museum of Fine Arts