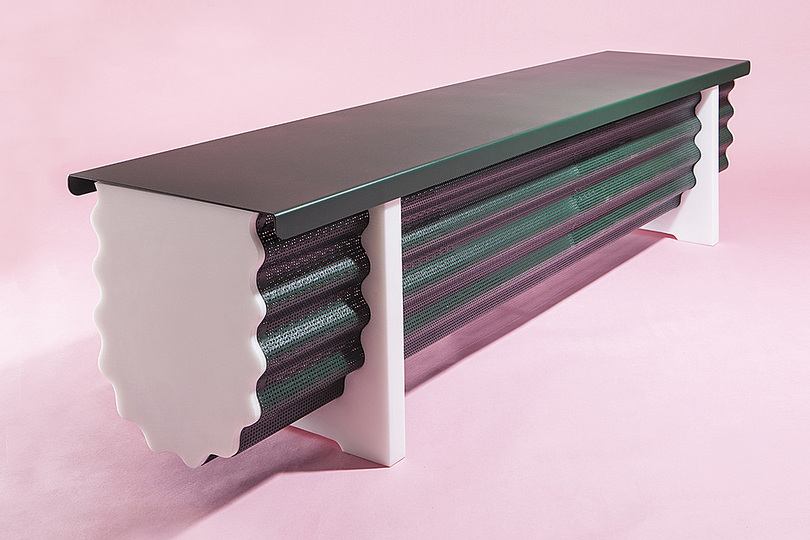 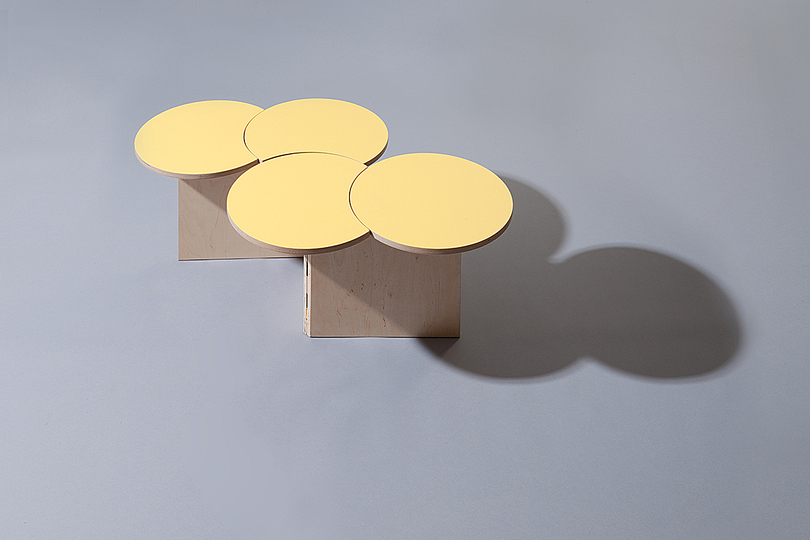 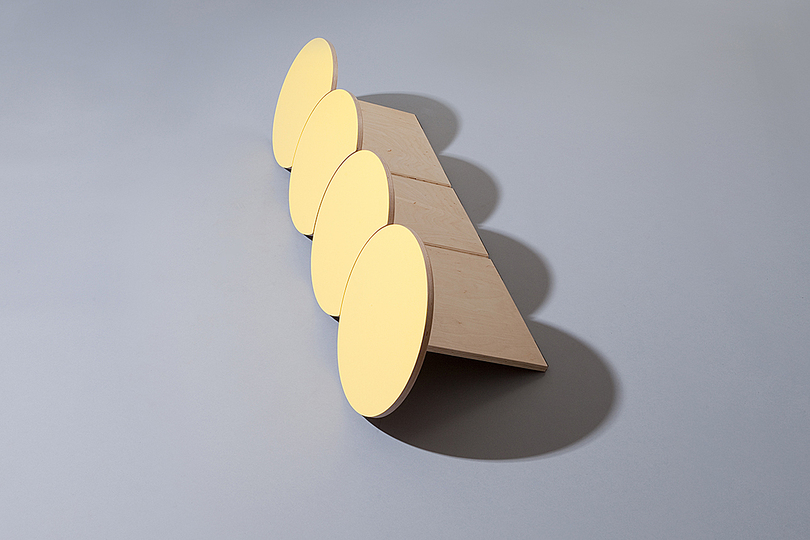 The Zini Bench is inspired by the character Zini of the German Children television “Spass am Dienstag”. “Zini, das Wusolon” is an 1980‘s Video effect of yellow dot that moved with its visual echo over the screen. It spoke with an electronically distorted and pitched voice. The bench consist of an array of half-moon shaped seats all linked-together by a vertical wall that has potential joints. When all the seats are aligned and thus the supporting wall segments are aligned Zini will fall over. Only by bending the joint of the wall does the bench become stable. The Bench will change shape and invites the user to play with it and adapt it to his needs. Zini can be set on or can serve as coffee table. The shortest version consist of 4 circles; 5 or 6 circles are also possible. It is made of cnc- milled beech multiplex. The walls consist of two sides of multiplex sandwiching a sheet of plastic. Groves cut into the sandwich allow it to flex to maximum 90 degrees per segment. Triangular wooden bars form a rest for the gliding parts of the seat and make a firm connection wherever seat and wall are fastened. The Zini Bench is a research of how to make a sculptural object, that can change through movement. It asks what a furniture can be. A frozen motion makes it stable, whereas a layout that is straight will tip over. The more movable parts the bench has the better. It is the reverse logic of a common seating object. 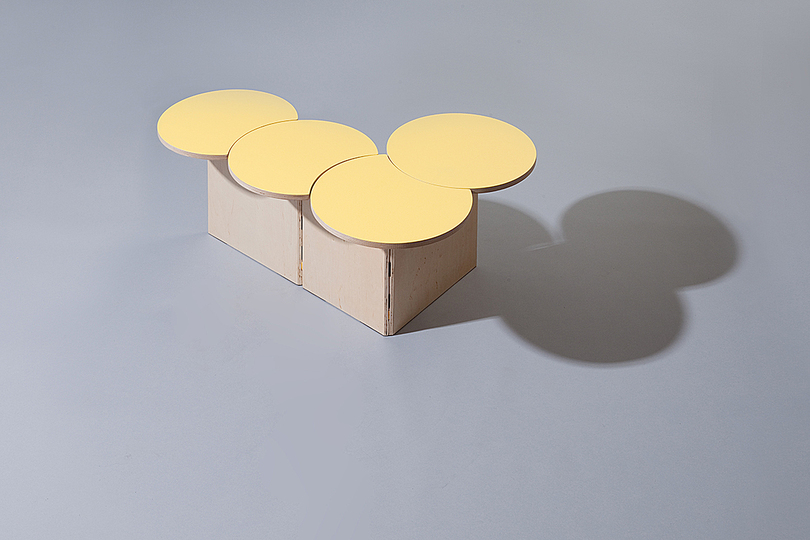 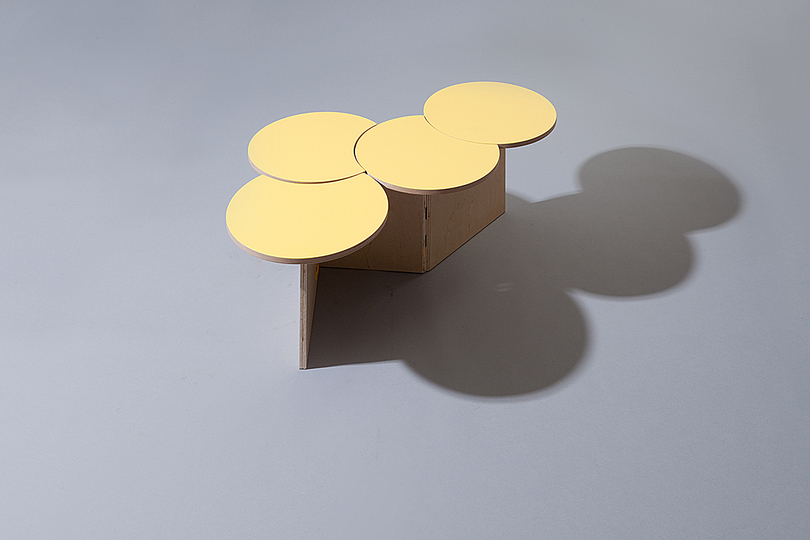 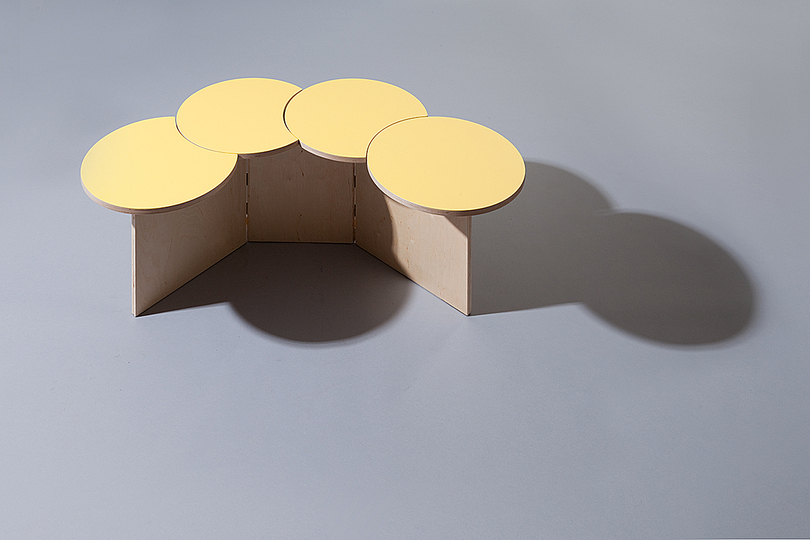 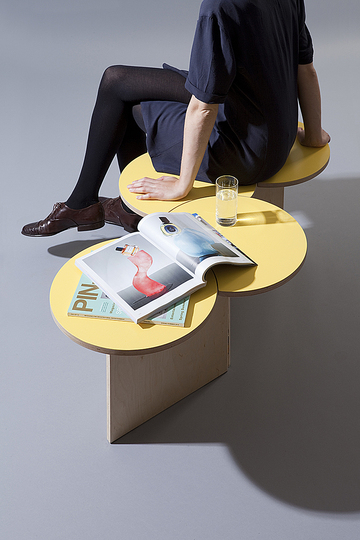 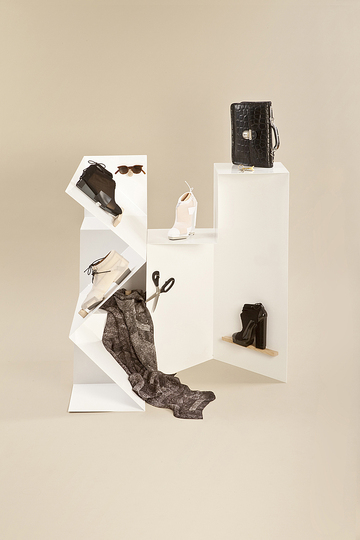 Z Step is a display system made from powder-coated sheet metal based on steps of 33 x 33 x 33 cm. Two of these steps can be stacked and assembled in different ways. They form different spacial configurations. There are magnetic bars, knobs and coat-hangers carved from beech wood to fix items on the Z step. In this way it becomes easy and versatile to show any kind of item like books, magazines, shoes, clothes, accessories, or other kind of products. 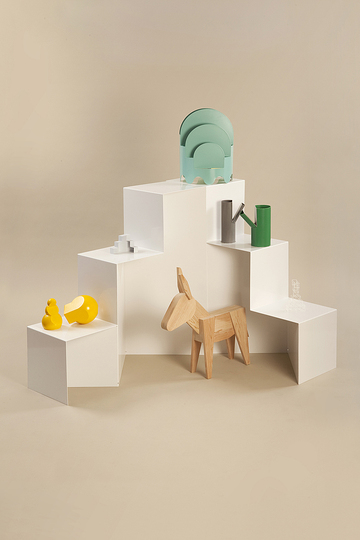 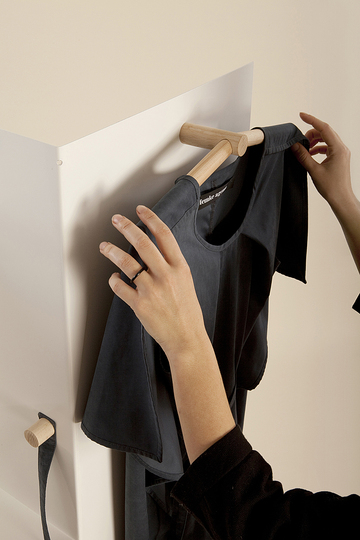 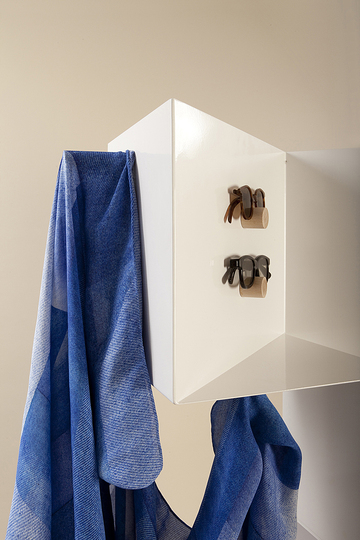 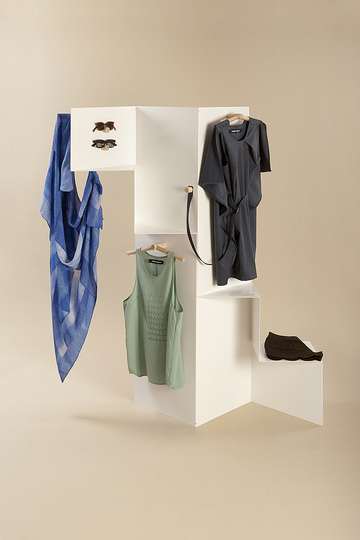 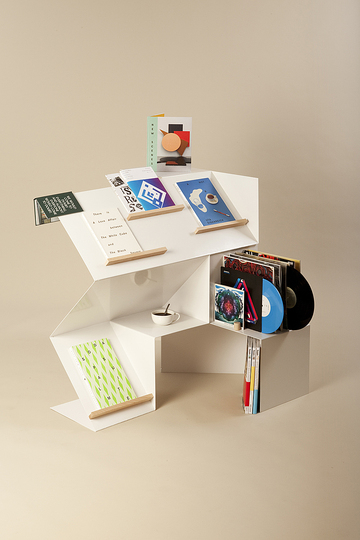 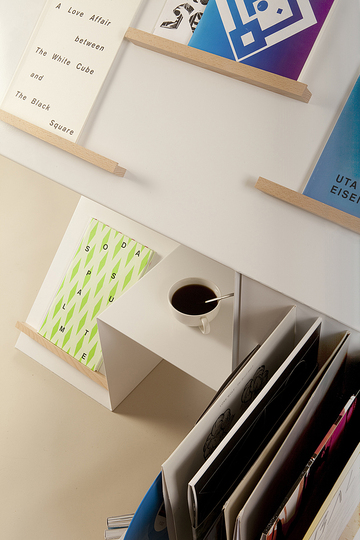 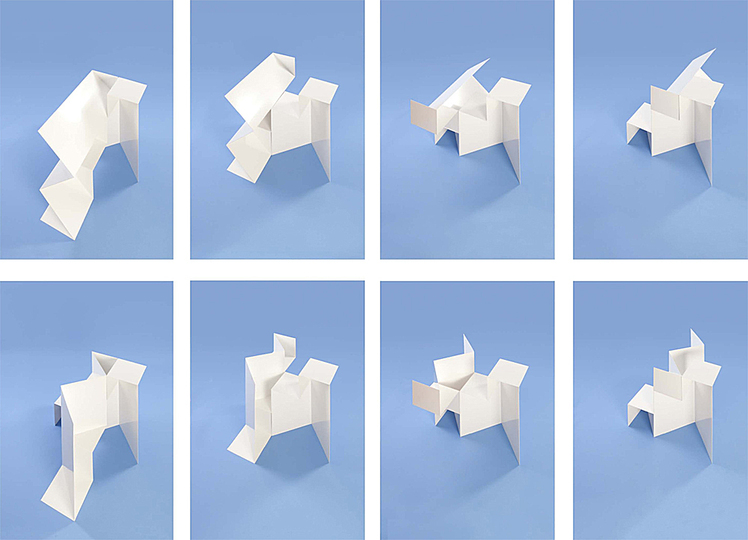 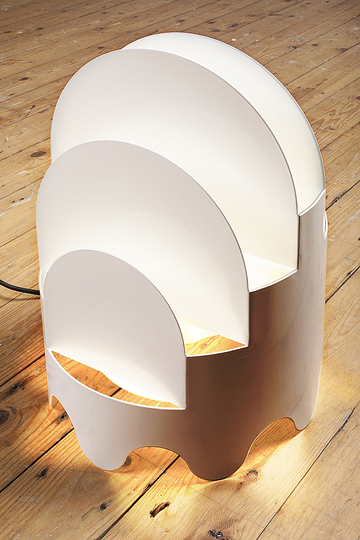 The Sunrise Lamp plays with elements of Art Deco, Modernism and Memphis. It is a cross between a stepping pyramid a cylindrical shape. The light given off from a circoflux energy saving lamp casts unsharp shadows. It reflects on to the lamp’s lamellas and lets them glow. On its bottom the volume is ended with a waving edge. This way the lamps body forms its own legs and lets it float above the surface it sits on. One can imagine the sun rising out of the ocean. The Sunrise Lamp is designed to stand on the floor or on a side table, even though it could also be hung. It is made from 2 mm thick powder-coated Aluminum and holds a E 27 Fitting in its middle. 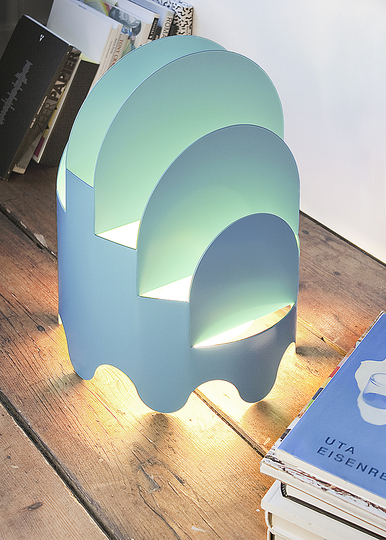 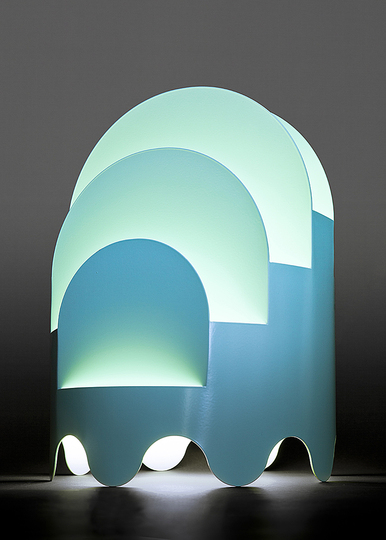 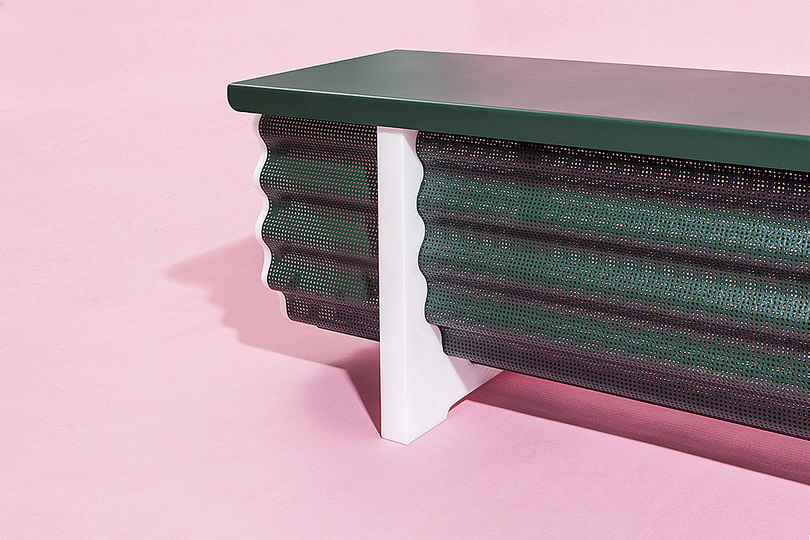 Crest & Trough is a crossover of different archetypes: a bench, a chest – and in terms of appearance – a trough. Its storage unit is made from perforated corrugated steel that is resting in a pair of U-shaped legs. As a result those legs as well as the end caps have to follow the bend sinus wave of the container. A lid from folded steel serves as a seat. The furniture is a split up in extrusion elements and those perpendicular to them divides the volume into graphic surfaces. 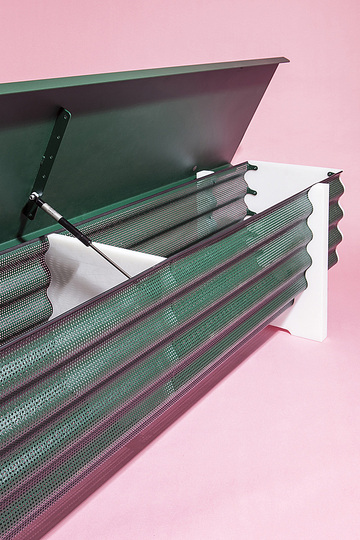 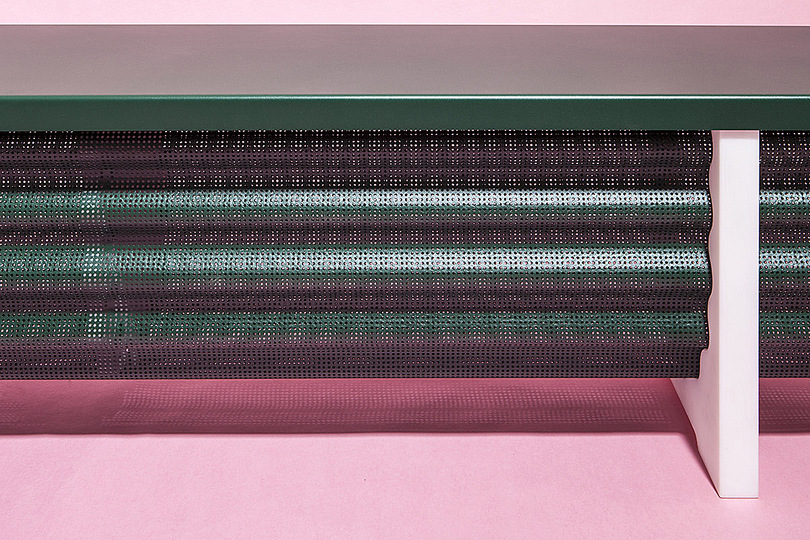 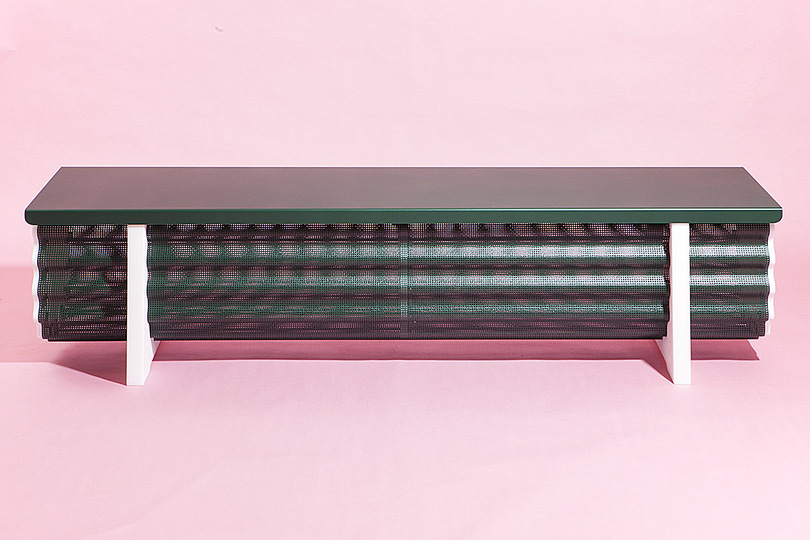