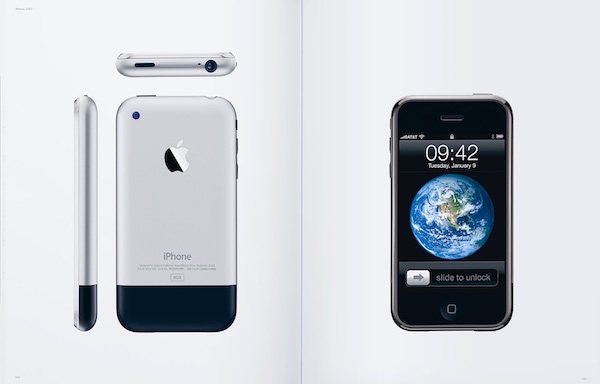 & collect
On June 28, Apple´s chief designer Jonathan Ive (born 1967) announced that he would leave Apple later this year. With Steve Jobs, he created the iconic Apple look, a breakthrough in the history of modern industrial design.

During most of the 1990s, Apple, which had ousted Steve Jobs, its founder and chief executive officer, had sluggish sales. The PC and Microsoft´s dominated the home computer market. Apple found its commercial success only after founder Steve Jobs returned in 1998. Leading the ´Golden Era of Design and Engineering´, it grew into a global company with $ 1 trillion in corporate value today.

The Silicon Valley tech industry and business media hurried to speculate and analyze why Ive decided to leave Apple. Was Tim Cook, who took over as chief after Steve Jobs´ death, less focused on design? Has he been frustrated by Apple´s sluggish sales and innovative limits in recent years? Or is Apple now reaching the limits of product maturity and innovation?

As Walter Isaacson wrote in Steve Jobs´ biography, the collaboration between Johnny Ive and Steve Jobs was one of the the greatest collaborations in modern history. Jonathan Ive, who came from the United Kingdom and joined Apple in the early 1990s, was irritated by the Silicon Valley company culture solely driven by profit maximization and engineering. When Jobs returned as Apple´s chief executive in 1998 with the consent of shareholders, Jobs´s declared that his goal was "not to make money, but to make great products." This stance inspired Ive, who grew up seeing and learning the craft of metalwork in his family workshop in the UK.

"Microsoft´s products don´t have taste," Jobs proclaimed. In 1998, when the dominant gray rectangular box-shaped PC dominated stores, Apple introduced the iMac desktop and iBook laptop and at once set new standards in computer design. Ive revived his experience of designing bathroom accessories at the British design firm Tangerine during his early years, giving the computer an emotional aesthetic.

Apple´s explosive sales success with its new iMac and iBook designs has made it into a design-driven computer company. From that time on, until Jobs death in 2011, was Apple´s decade. Cobining charismatic management and brilliant design, Apple introduced a series of radically innovative products: the iPod (2001), iPhone (2007), and iPad (2010), reshaping multimedia and computing product categories.

Ive was fortunate to have a partner in business that any corporate designer would ever dream of. Knowing that the success of products was determined by design, Jobs treated the design department with the greatest importance. The two were close friends, close enough to have lunch and discuss almost every day.

In fact, Jonathan Ive is not a designer who has pioneered a breakthrough style. The Apple look is a successor to the functional aesthetics of Dieter Rams, chief designer of Braun, the designer synonymous with 20th-century German consumer electronics. Ive is a faithful successor to the philosophy of German functionalist design that combines Dieter Rams´ design ideas with 21st-century technology. As Steve Anderney, the author of "Steve´s Head", describes, Jobs was such a fan of Dieter Rams´s design that he had a serious discussion with his family about the importance of the design of German-made home appliances.

Peter Drucker, the father of modern business administration, said that the reason for the existence of the corporate organization is innovation and marketing. Apple is a classic business example of innovation and performance that other businesses want to learn as best practices, from design and technology innovation, to advertising and marketing strategies, and to business practices.

Recently, Apple sales show signs of slowing. The main reasons for this are the sluggish sales of the successor to the iPhone X, which has been set at a high-priced strategy due to fierce competition from global smartphone makers in China. Apple´s design has evolved gradually since Jobs passed away, but it hasn´t seen the breakthroughs in design and innovation like in its heyday.

Ive´s resignation from Apple does not mean retirement. He will open a design agency called LoveFrom and offer design services to Apple, the first client. LoveFrom is an amalgamation of Jobs and Ive´s design philosophy, and Ive explains that the product is the name of Jobs´philosophy that products should be expressing gratitude and respect for humanity with love and consideration.

Jonathan Ive is a fortunate designer who has achieved much under a great friend and leader and fulfilled the responsibility of chief design officer. He now leaves Apple with a competent design team and an organizational culture that will allow the company to continue its design path. At his newly formed LoveFrom Design Agency, he will kick off his second career as a designer and design manager. 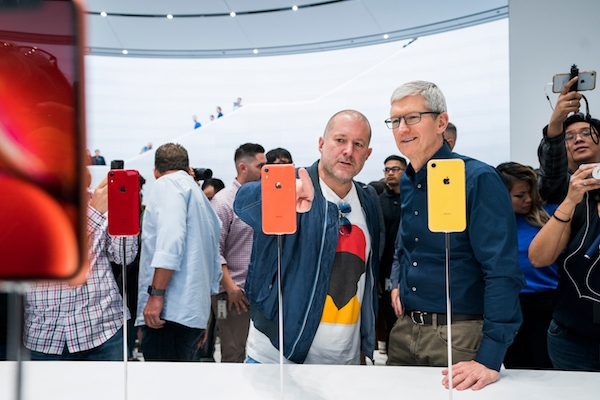 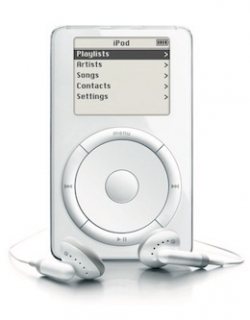 'Less, but Better'- the iPod is very similar to the minimalist design of Dieter Rams' Braun home appliances. 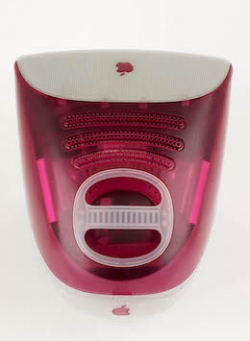 IMac desktop computer, released in 1998. Apple's transparent plastic material, smooth and shiny surface, and the 1980s Italian (e.g. Alessi) emotional aesthetics were first introduced in tech products, and they soon became a dominant design imitated by other companies. Johnny Ive's sense of working as a bathroom designer is evident. As the appearance is beautiful, it must be designed beautifully also inside. Apple AirPort Router Design. Courtesy: Apple.

Celebrating the 20th anniversary of Apple's design, the first-generation iPhone design from "Designed by Apple in California'', published in 2018. Courtesy: Apple.