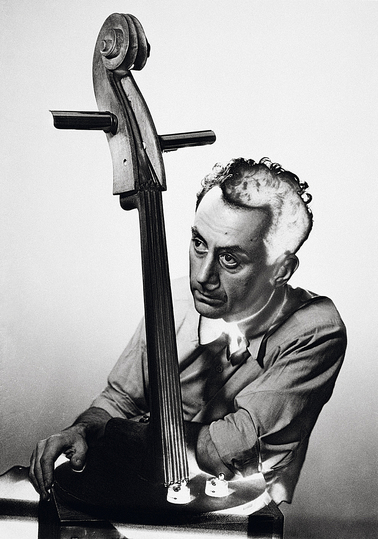 & collect
Man Ray (August 27, 1890 – November 18, 1976), born Emmanuel Radnitzky, was an American artist who spent most of his career in Paris, France. Perhaps best described simply as a modernist, he was a significant contributor to both the Dada and Surrealist movements. Best known for his avant-garde photography, Man Ray worked in a variety of media and considered himself a painter. Between 1916 and 1917, he created a series of collages he called "Revolving Doors." He included the series in his third solo exhibition at the Daniel Gallery in New York, in 1919. The collages, whose geometric shapes combine machine-like and anthropomorphic forms, were framed and installed on a rotating pole that the viewer could spin. The original collages were destroyed, but Ray later reproduced them in this series of stencil prints, published by Éditions Surréalistes in Paris. When Man Ray exhibited the Revolving Doors, he wrote labels to accompany each work. He later published the entire series in the Surrealist periodical Minotaure 7 (1935). The original, typewritten document is in the collection of the J.P. Getty Museum, Los Angeles.
share Man Ray
g t l v w f
penccil.com/gallery.php?show=8459 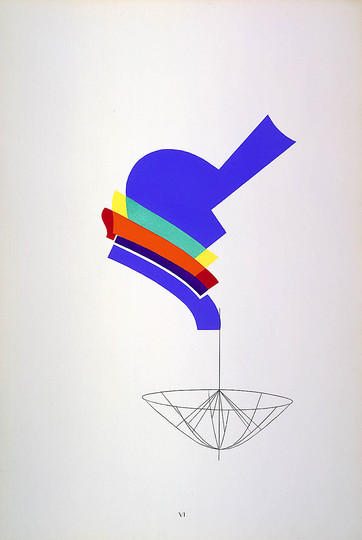 VI. Decanter: In this case the retort is tilted purely in a spirit of enjoyment; the mold that is produced by the contents is quite adventitious, but carried out with all the deliberation of a preconceived design. It acquires courage from its sudden change of function: built to reject, it becomes an instrument of acceptance. Man Ray New York, 1916–17 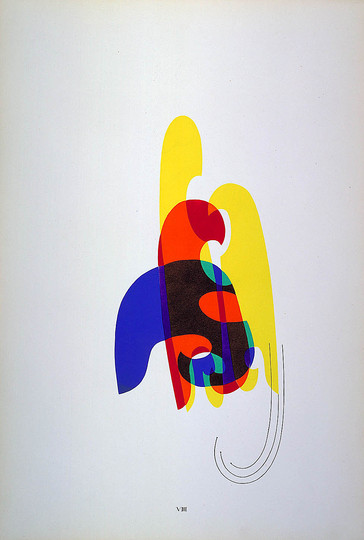 VIII. Shadows: If three beams of light be thrown on an object from different angles, or if the object were turned on three different angles simultaneously in relation to a single beam of light, the resulting shadows would assume various proportions although their character would remain the same. In the same way, if a form be invested with three colors at the same time and viewed from different angles, three distinct characters would result. They could be seen, however, only by imagination. Man Ray New York, 1916–17 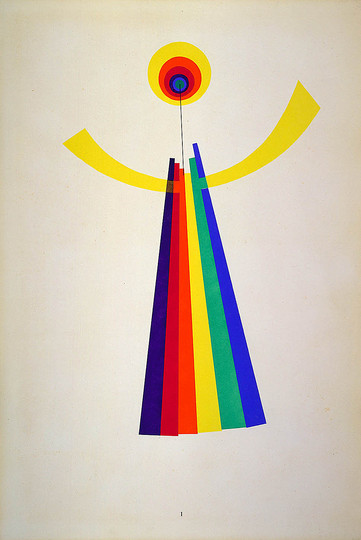 I. Mime: The two manners of creating a flame-like effect: by a radiation of bands of the spectrum starting from a common center and contained within a sector, and the other, by concentric bands of the spectrum. The center for both is the same, giving a personal interest. Armbands carry out the intention to the surrounding space. The mood interpreted may be characterized as a laughing one. Man Ray New York, 1916–17 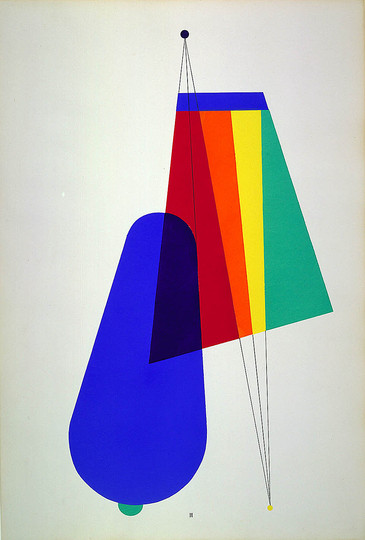 II. Long Distance: In the same way that the augmentation of the number of cylinders gives the motor a soft character, two eyes can unify between them what, to a single eye, would look like several fragments. Parting from an arbitrarily selected point as the source of these diverse notions, the two eyes tend to share the same point of view. The intervening atmosphere can be considered as agent of the achievement of monochrome. Man Ray New York, 1916–17 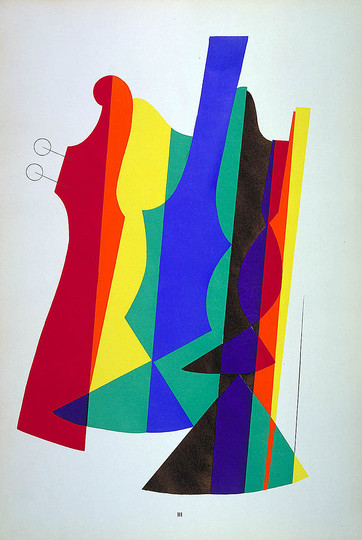 III. Orchestra: Taking their departure from the least indication of a motif, a succession of planes proceeds from an intensity of projection connected with the total volume of accumulated prisms. Although carrying in itself all the augmentations of original desire, this is a hyperbolic ambition ending in the routine of the movement. Man Ray New York, 1916–17 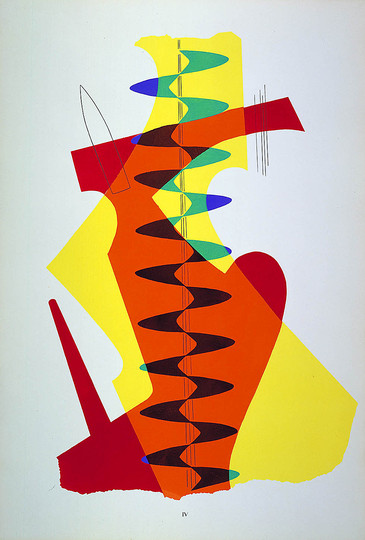 IV. The Meeting: Three beings meeting in one plane are contrasted, a yellow concave, a red convex, and a spiral blue. There is mutual affection of color over the areas that two or three occupy together, resulting in a modification of their color but not in their form. Still it is possible to see the areas held in common as distinct additions. As in the other scenes the lines form a not too literal boundary for the planes. Man Ray New York, 1916–17 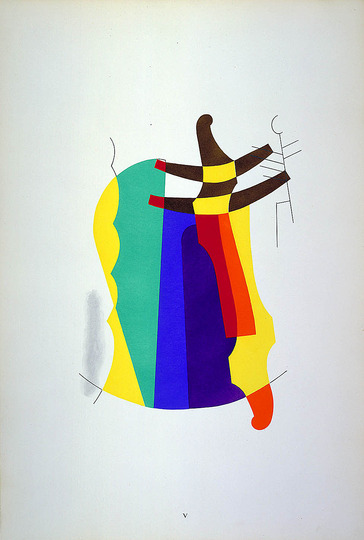 V. Legend: If one takes an umbrella in section, where one takes of the tip and where one turns it around on its curve, a container presents itself with an increase of color containing the handle. Between the drawn forms anonymous forms produce themselves which are left transparent, or which are filled with hues that can remain after the others have made their choice. (Note that the anonymous forms are also important.) Man Ray New York, 1916–17 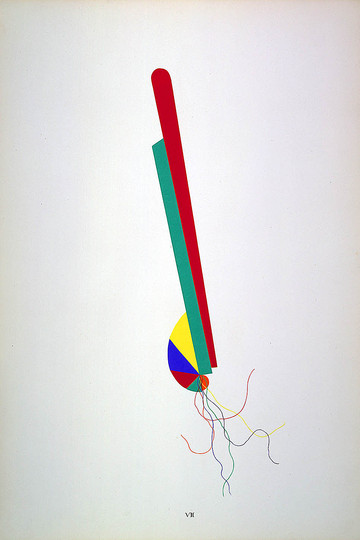 VII. Jeune Fille: In another case the color is used exclusively like opaque medium. Thus, the greatest precautions are necessary when a method of logical procedure must be developed. It is not permitted to let two tones that present any kind of affinity to be next to each other. In this manner the nature of the subject allows itself to become enveloping, with a clarity of intention that compensates for all original uncertainty. The inevitable consequence is a projection into space itself…an equivalent for light. Man Ray New York, 1916–17 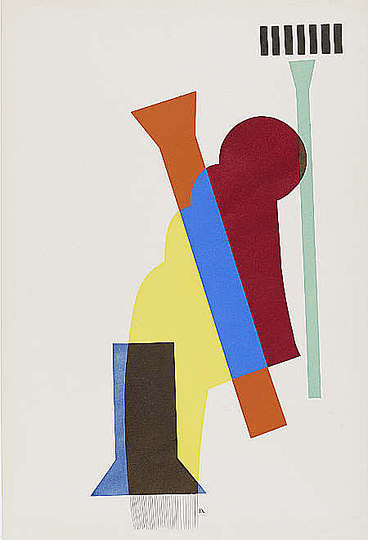 IX. Concrete mixer: Grating beyond any need, three funnels will receive only a liquid and will determine the color by their relative positions. All existing residue distributes itself impartially on the three and touches spherical proportions. The wooden planks criss-cross as long as there is some work to do, and supply an appropriate sourdine to an operation otherwise too discordant. Man Ray New York, 1916–17