& collect
The Venice recreation area opened on July 4, 1905. Unfortunately for Abbot Kinney, the developer of Venice of America property project in Los Angeles, the majority of the inhabitants of Venice of America did not share his interest in art and culture. Even though he hired the best lecturers and performers of the time, the Chautauqua-like Assembly lost $16,000 the first summer.

By December 1905, Kinney knew his dream of creating a great cultural mecca had failed and, ever the astute businessman, he turned his attention to accommodating the wishes of the public. The character of Venice succumbed to the beach-goers and summer holiday guests who frequented the community´s many amusement attractions.

Venice came to be known as the "Coney Island of the Pacific." By mid-January 1906, an area was built along the edge of the Grand Lagoon patterned after the amusement thoroughfares of the great 19th and 20th century expositions.
share Venice of America
g t l v w f
penccil.com/gallery.php?show=8821 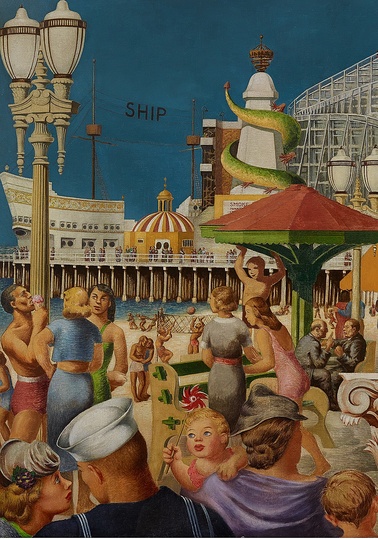 Deatil from the painting depicting visitors enjoying Venice of America theme park. It featured foreign exhibits, amusements, and freak shows. Trolley service was available from Downtown Los Angeles and nearby Santa Monica. Visitors were dazzled by the system of canals complete with gondolas and gondoliers brought in from Venice, Italy. There were ornate Venetian-style businesses and a full-sized amusement pier. Around the entire park, a miniature steam railroad ran on a 2 1⁄2-mile (4.0 km) track. Kinney and some of the nearby residents were aghast at some of the low-class shows that Venice began to offer, but it was considered the best collection of amusement devices on the Pacific Coast, and made a handsome profit. 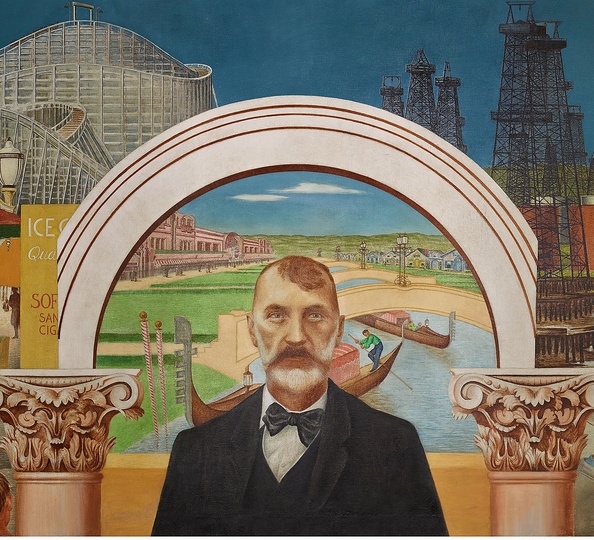 From the Edward Biberman painting of "Abbot Kinney and the Story of Venice". Detail featuring Mr Abbot Kinney in the center.

Flyer promoting canals at Venice of America as "America's most unique attraction, circa 1920. The Venice Canal Historic District is a district in the Venice section of Los Angeles, California. The district is noteworthy for its man-made canals built in 1905 by developer Abbot Kinney as part of his Venice of America plan. Kinney sought to recreate the appearance and feel of Venice, Italy, in Southern California.

Detail from the painting depicting Industrialist, property developer, and architect.

Detail from the painting with scenes of industry.