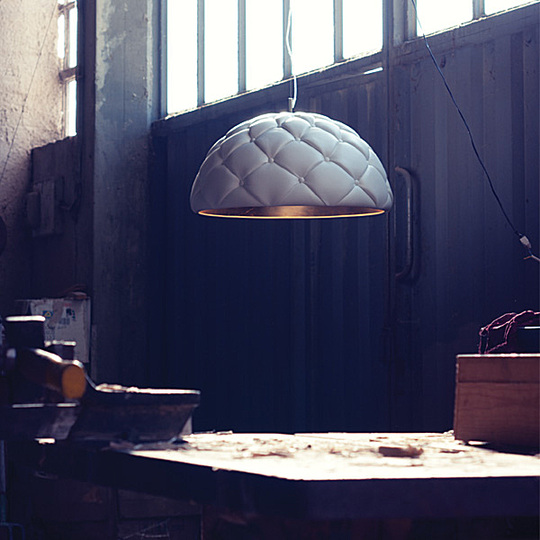 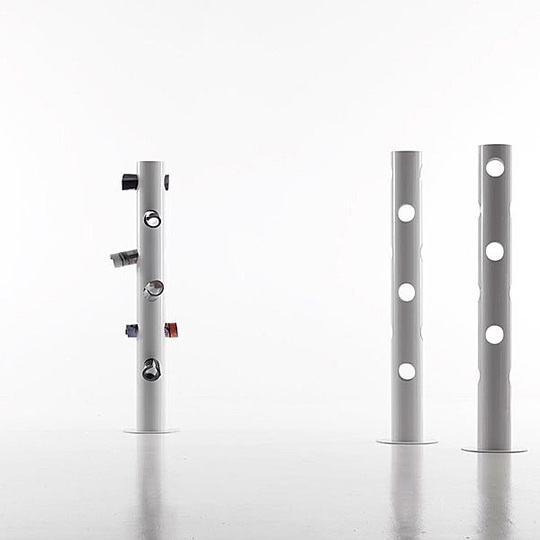 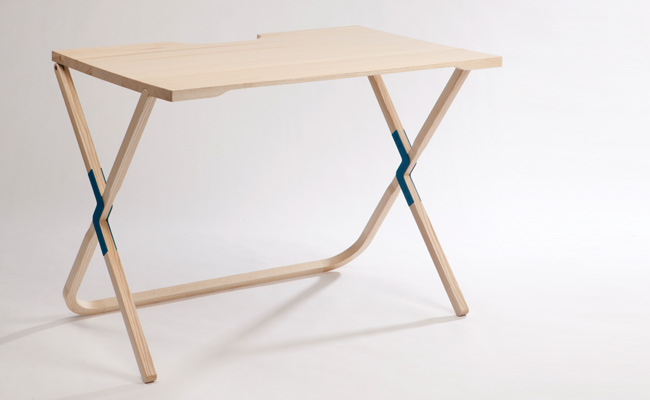 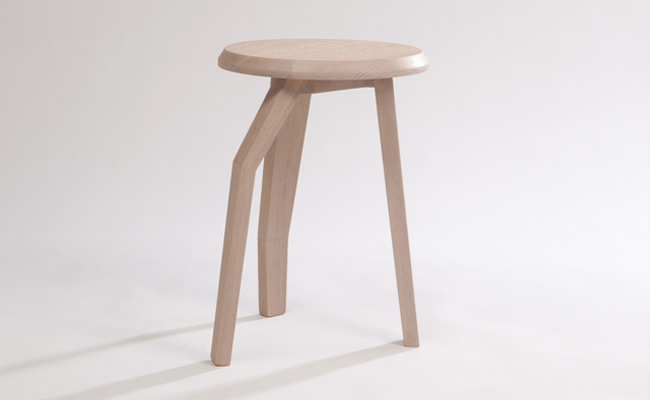 Superequipe: The stool RICHARD plays with our viewing habits. He confronts us with self confidence. At the same time cautious and ready to escape, he turns away. An unexpected appearance in solid oak. 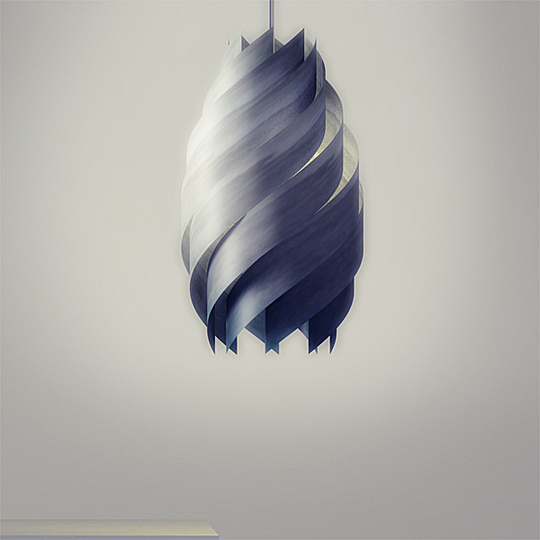 Enrico Zanolla: Some studies on wood veneer applied in the lighting decoration. 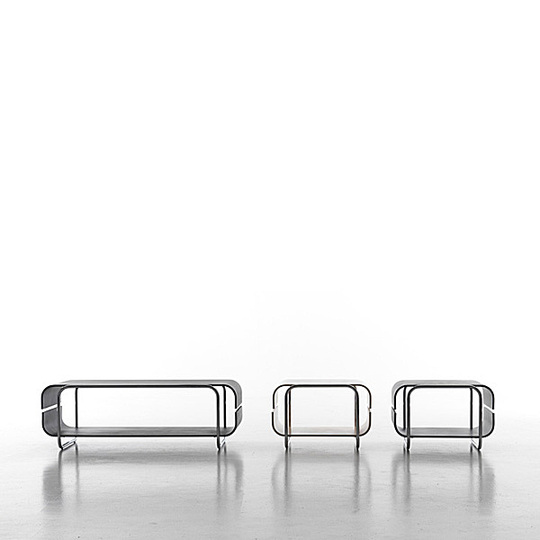 Enrico Zanolla: A stylish, modern coffee table in wood and chromed steel. Available in a range of finishes, either lacquered or veneered. In veneer: natural beech, bleached beech, zebrano and wenge. In lacquer either mat black or mat white. 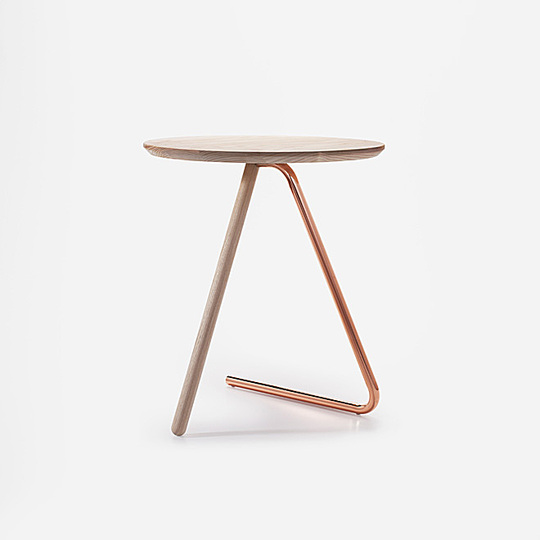 Jonathan Sabine: The Fewer Than 3 side table has three distinct parts – a wood top, a wood dowel leg, and a bent tubular steel leg. The steel leg bends so that it runs along the ground, making contact at two points. With the steel tube performing double duty in this way, the table, technically, stands securely with fewer than three legs. The result of this arrangement is a light, asymmetrical table, the figure of which changes significantly according to view angle. Superequipe: SAM&SUZIE offer a new take on folding furniture. Their integral shapes are made possible by a convenient yet unexpected folding mechanism. Despite its unusual U-shaped backrest SUZIE can easily fold and be stored. 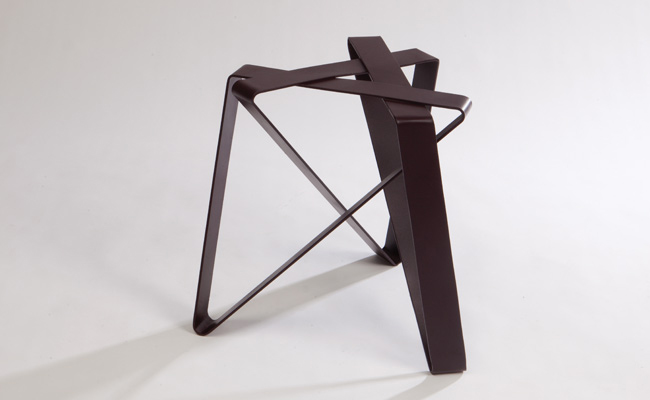 Superequipe: One, two, three identical belts of steel winding in and out, crossed and tied together to form the stool ANNA. 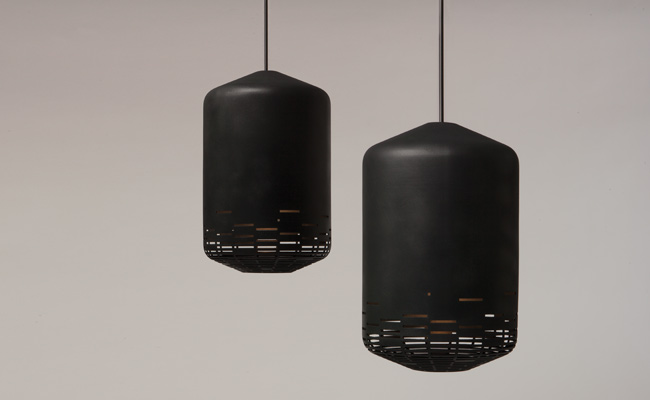 Superequipe: Light / dark, inside / outside, entity / void – The pendant light NOTCH plays with contrasts and unites them in one shape. The decomposition of materiality offers light a new perspective. 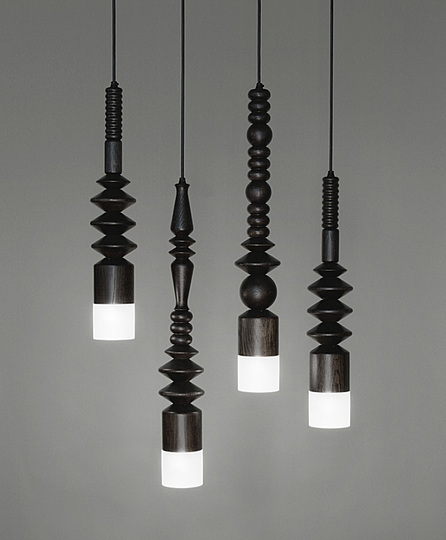 Jonathan Sabine: Beads is a hanging lamp series designed after beaded objects such as bracelets, necklaces, and rosaries. The solid oak beads that make up this lamp are produced on a computer controlled lathe and then strung on a lamp cord, in much the same way as the objects that inspired them. An acrylic diffuser softens the light emitted by a low-watt compact fluorescent bulb. Beads is not currently in production. 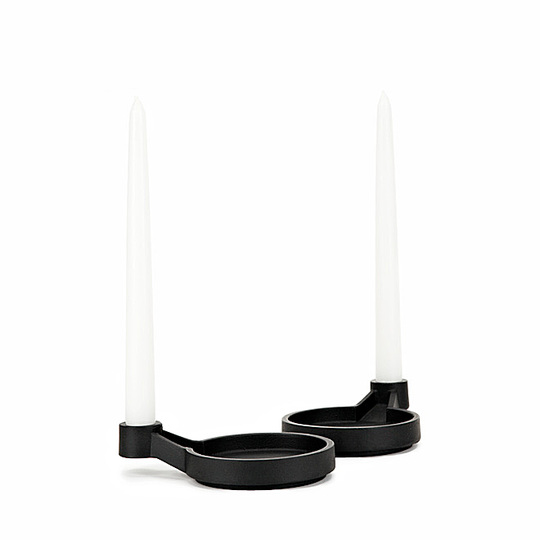 Jonathan Sabine: Like the Cast pendants, Array is made from sand cast aluminum with a powdercoat finish. This simple form is a combination candle holder and dish that can be used individually or stacked into a more complex candelabra. The idiosyncrasies of the sand-textured surface create a counterpoint to the design’s precise CAD-generated form. 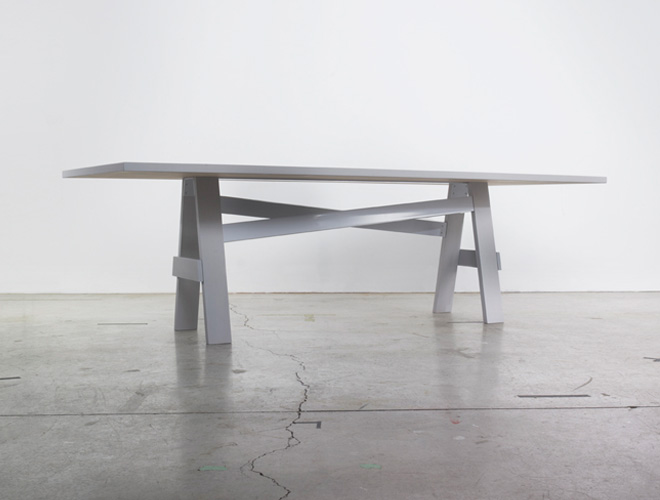 Jonathan Sabine: This table was designed for Toronto event space 2FL. The tables needed to be tough and stackable, and had to seat people along their entire perimeter. Rectangular (pictured) and round tables were produced. 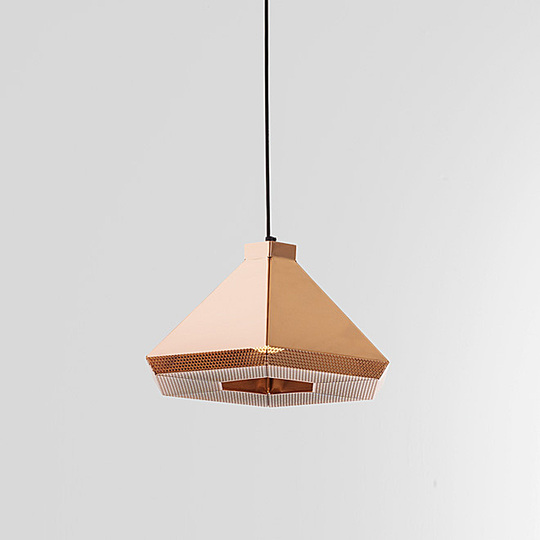 Jonathan Sabine: The panels that comprise the body of the 60 Pendant are created through a combination computer controlled machine and skilled hand work. The fabrication process transforms thin steel sheets into the body of a pendant. These same panels that function as the pendant body act additionally as a light diffuser by way of the delicate perforated pattern cut in their lower half. The name 60 refers to the corner angles of the of an equilateral triangle, a shape that appears in the the hexagonal form of the fixture, and which is also the basis of the perforated pattern on the underside of the fixture. 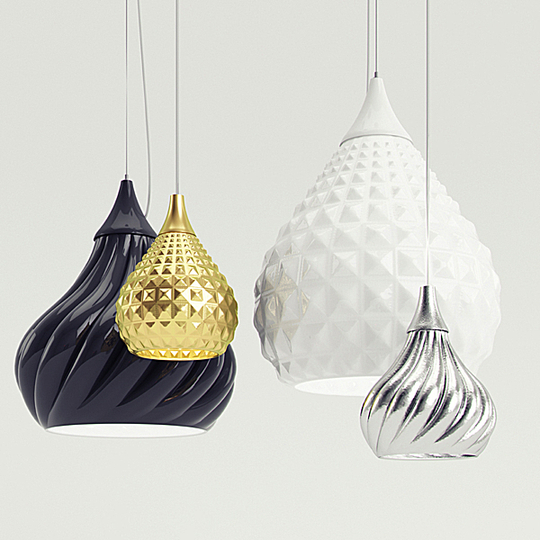 Enrico Zanolla: “this project is a tribute to the beauty and uniqueness of the St. Basil cathedral in Moscow. during my stay in Russia I spent time observing and studying the constructive system of the domes. the difference in colour and size comes from symbolic meanings assigned to every single dome. a great attention has been paid to details and quality of realized domes, and everything was made without using a 3d cad. so these charming domes became a challenge and a strong idea to convert them in lamps, mainly because they were designed like candle flames symbolizing that every man is “the light of the world”. the final suspension lamps are characterized by dynamic shapes, reflecting the movement of a candle and at the same time containing the modular constructive system used in the original domes.” 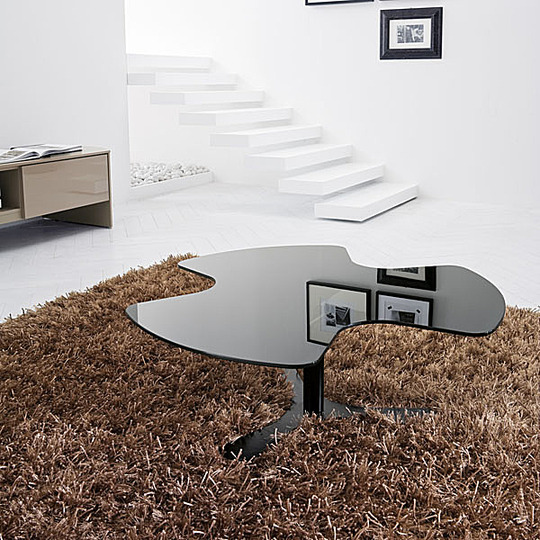 Enrico Zanolla: Inspired by the flower petals, Spin fills up your living room with its suggestive shape. Made of steel tube and base cut by laser, it is available in lacquered and glass top. 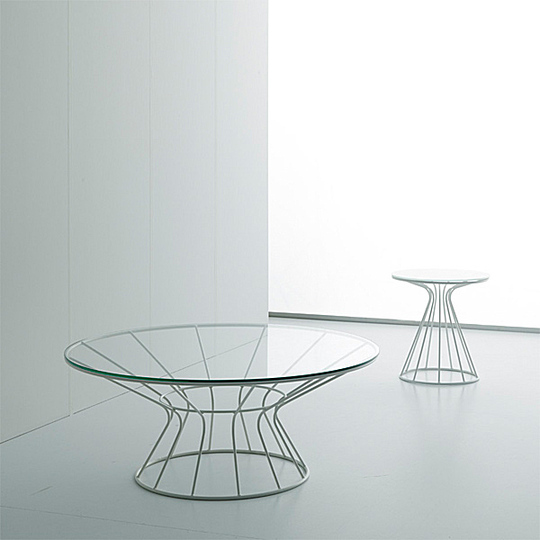 Enrico Zanolla: Sirio is a collection of coffee tables and stool. The structure is restrained by a circle giving the impression of being chocked. They are available in different colours with top in glass and upholstered seat for stool. 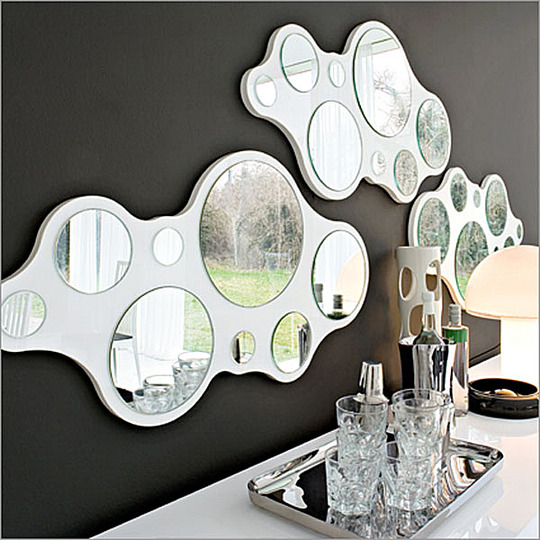 Enrico Zanolla: Bubbles is a very versatile mirror. It can be used in different combinations on the wall, using two or three items together. Made of a wood panel with different diameter mirrors glued on it.

Enrico Zanolla: The inspiration for this suspension lamp comes from the pattern of Chesterfield sofa, applied then on the exterior surface of the lamp. The contrast between the smooth interior and the sophisticated and deep buttoned exterior is ideal for a modern interior space with a touch of glamour and classic style.