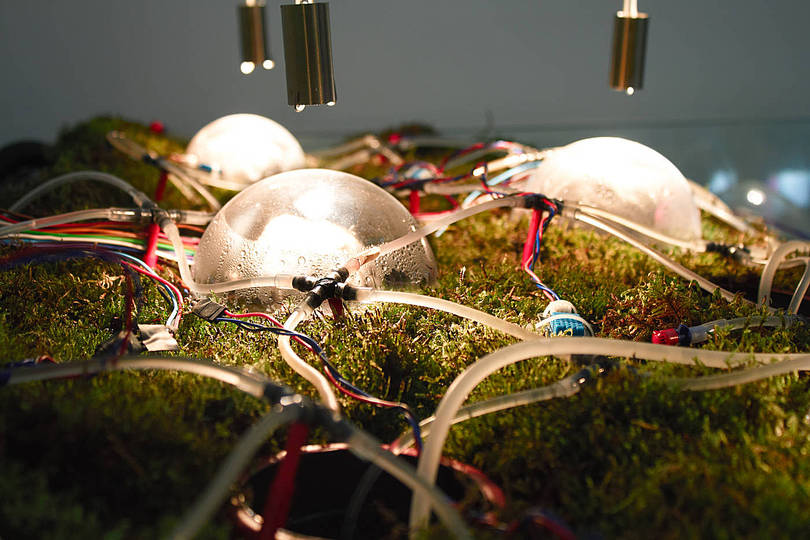 & collect
Studiomobile is a design office established by Antonio Girardi and Cristiana Favretto in 2007. It conceives the design as a holistic field where blending architecture, art, technology and urban ecology. It is mobile because it shifts among different disciplines involving mixes of software, creative thinking, handicraft, lab-activities, cultural and social research and whatever else is necessary to create multifunctional solutions and innovative imaginaries.
Cristiana Favretto was born in Italy near Venice. She has an architectonic and artistic background. She took a degree in Architecture at the University IUAV of Venice. She worked as a designer in Spain and Italy for international offices. She has been working on various site specific and art installations combining nature and technology in “organic machines”. Her work was presented at Venice Biennale 2012. She gave lectures in various Universities in Europe and organized workshops in collaboration with galleries and public institutions. At present she's a researcher at the University of Florence.
Antonio Girardi was born in Italy near Venice. He studied in Spain and in Italy. He graduated with full marks in a five years university course with a degree in Architecture at the University IUAV of Venice, where he has been working since 2006 as an assistant and lecturer in the degree program Building Production and in the degree program Sustainable Design. Since 2011 he has been awarded with a research grant for the PhD degree in Technology of Architecture concerning seawater as a valuable resource.
share Re watering
g t l v w f
penccil.com/gallery.php?show=9493 Re Watering is a simple system to grow plants indoor. It is an artwork consisting of three ovules and a column made of ceramic as well as an ingenious system to continuously recycle water in order to irrigate a small vegetable garden. Most part of the pieces is handmade and self-produced. Re-Watering is a system to grow your own small kitchen garden. Mint, lettuce, basil, strawberries as well as ornamental plants will grow in your house or in your working space. It will take up little space and allow you to have fresh vegetables and aromatic or ornamental plants all year long! Re-watering is a closed system, thus does not pollute the environment. It reduce the use of pesticide against parasites (which usually live in the soil) and avoid the use of weedkiller. It also contribute to purify your air. During the photosynthesis process, plants emit oxygen and absorb carbon dioxide. In addition many plants are able to remove pollutants present in every house: formaldehyde, ammonia and benzene, coming from paints, detergents, smoke and computer monitors. Plants can purify the air and increase your well being and attention. It will be also increased by the white noise of water. Hearing the soft swish of water can contribute to create a relaxing mood and to increase concentration during studying and working activities. 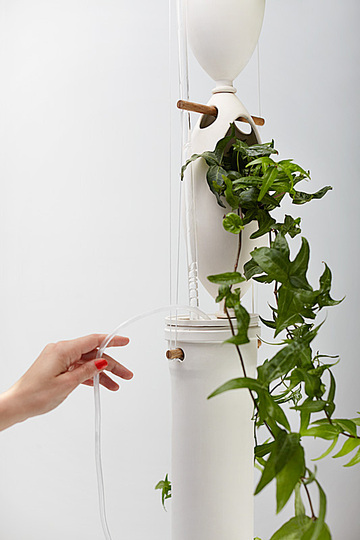 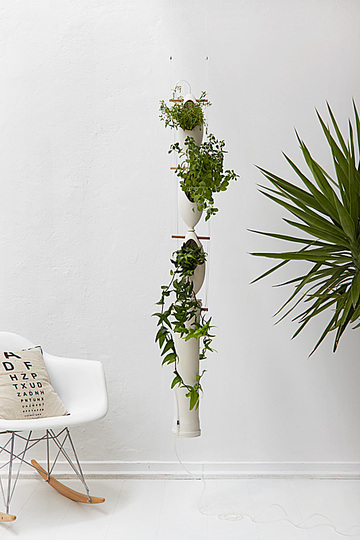 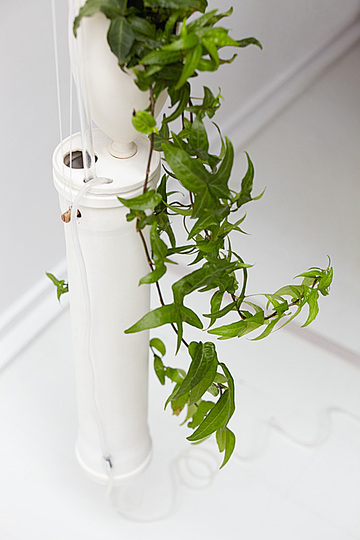 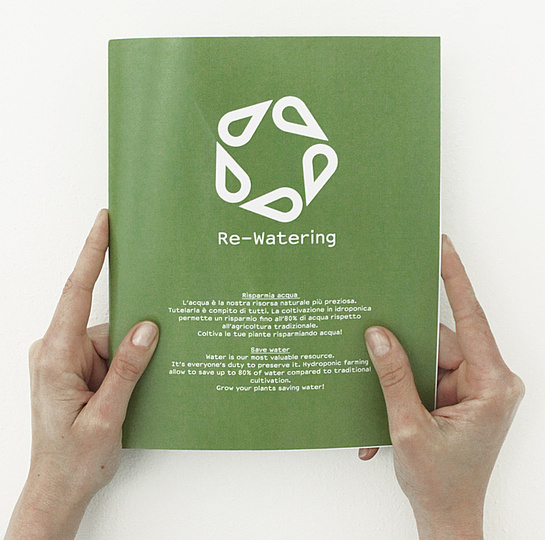 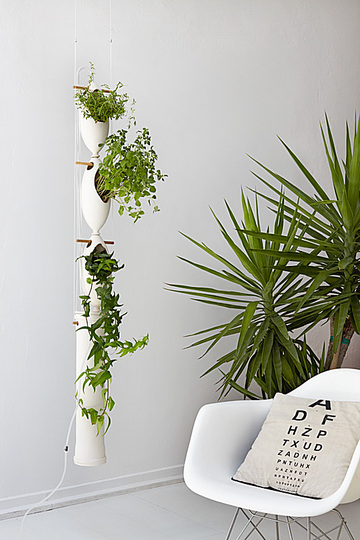 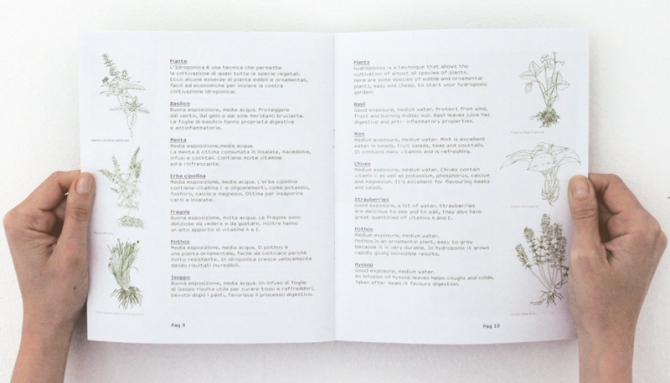 The Hydro Cobweb installation is a reconception of nature, a large biotic machine suspended in air that fills the areas of the Replay Store like an enormous spider web suspended between its green walls. Like a living organism, it has a central part consisting of a large Plexiglass sphere where florescent lighting heats seawater which evaporates and condenses in the walls as fresh water. The desalinated and mineralised water feeds satellite pods containing plants grown using aeroponics technology. The idea is one of a controlled experiment in a scientific laboratory which contrasts yet closely communicates with the large vertical green installation of the Replay Store and lets nature run its natural course. The central themes are ecology, technology and water: it is a study of the relationship between living organisms and the surrounding environment, an awareness that technology will lead to a new way of coexisting with nature and the main theme of water as something which is essential to life, health and development. 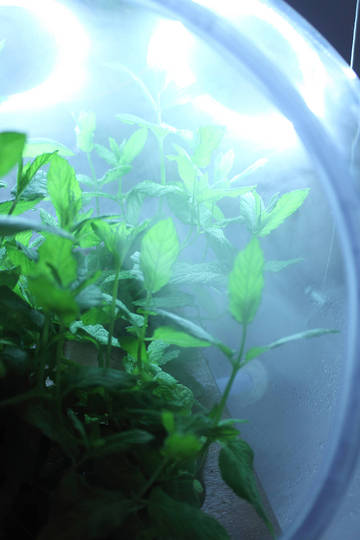 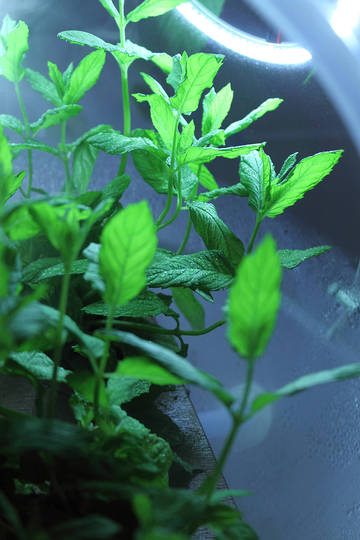 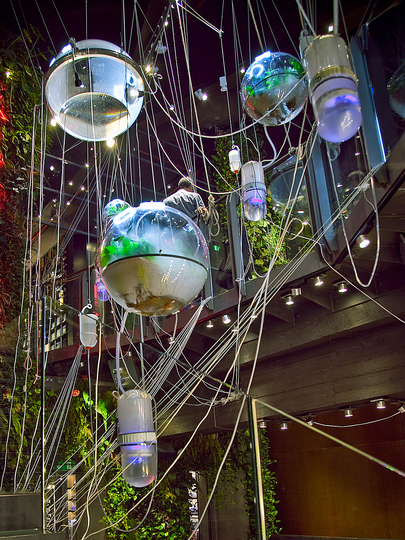 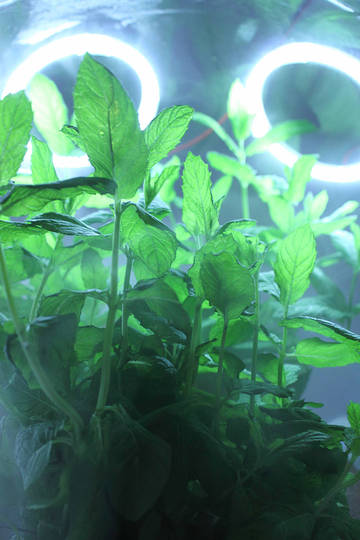 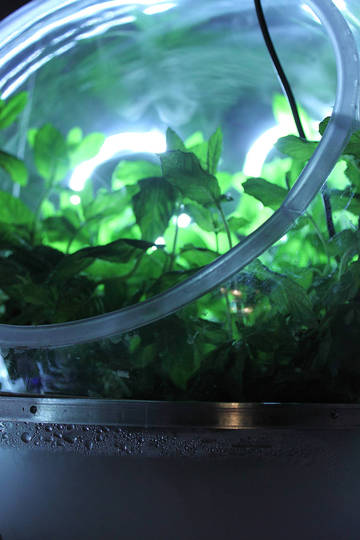 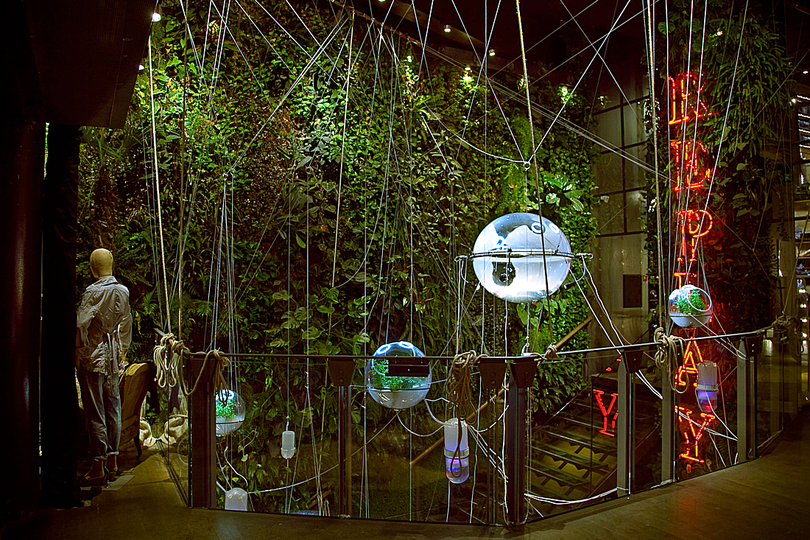 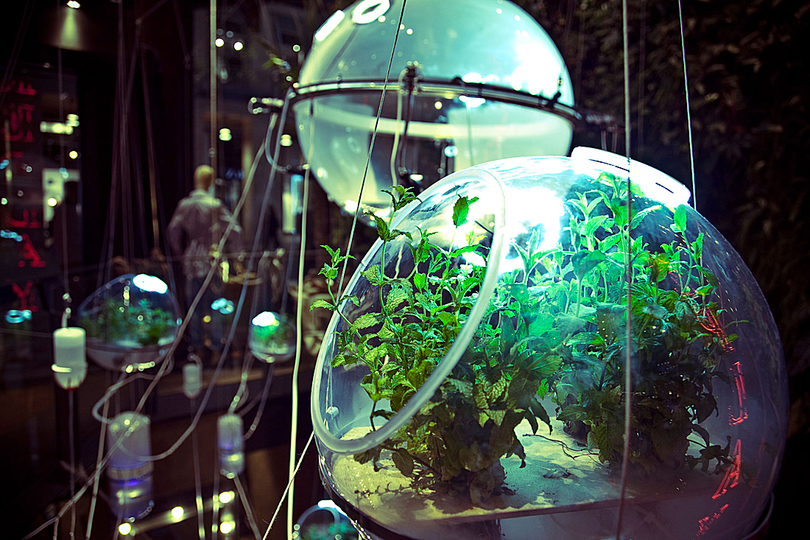 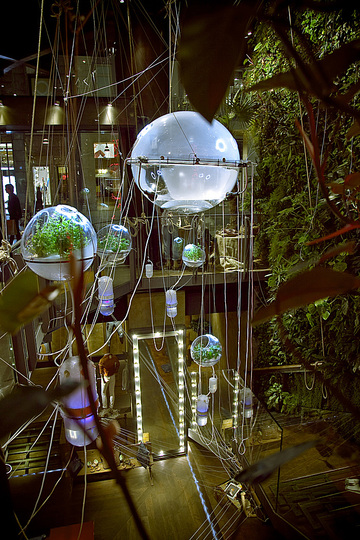 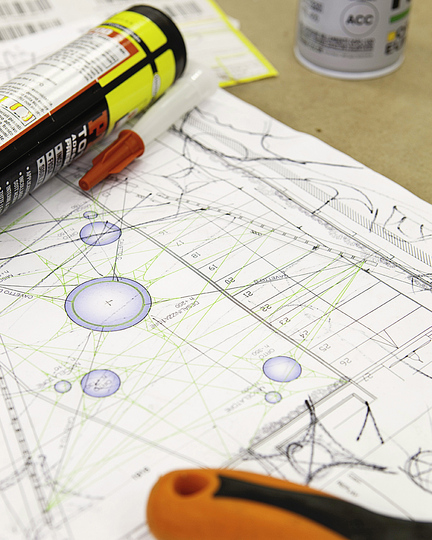 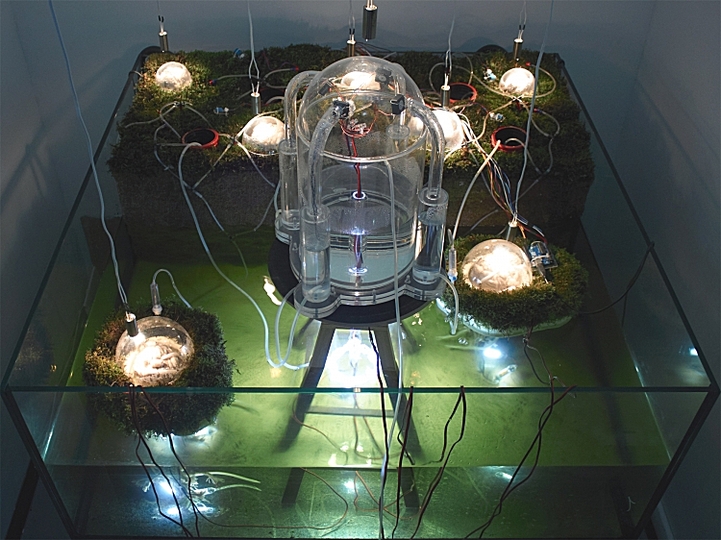 For the Venice Architecture Biennale 2012, we explores a future scenario where men are forced to live in an unusual landscape shaped by environmental changes. Today, more than half the world's population lives and works in a coastal strip 200 kilometres wide, and in the near future sea is expected to characterize even more urban settlements. But not only adaptation is required. Next strategy will be assimilation, an approach characterized by embracing the changing conditions and taking advantage of the resulting opportunities. We imagine new communities based on movement, living in flexible, self-sufficient, and nomadic structures. The ecosystem Networking Nature lives off seawater. Within a glass tank filled with salt water, some solar stills extract fresh water by exploiting the heat produced by small lamps. Seawater evaporates and the steam condenses into fresh water, which is collected in tanks and then supplied. However, water is not produced in isolated systems under central control. The new model provides for a large ecological infrastructure as well as small local production units connected to a network able to integrate the production of fresh water and to supply it where needed. It's a Smart Water Network (SWN) controlled by sensors that read the local lack of water and, through an Arduino board, activate the pumps providing the water where there is a peak of demand. The SMN will be a layer of the ecological network as well as the Smart Power Grid and the communications network. This strategy gives response to the preservation of the environment and also is a radically new model that ensures a democratic access to the resources to everybody. 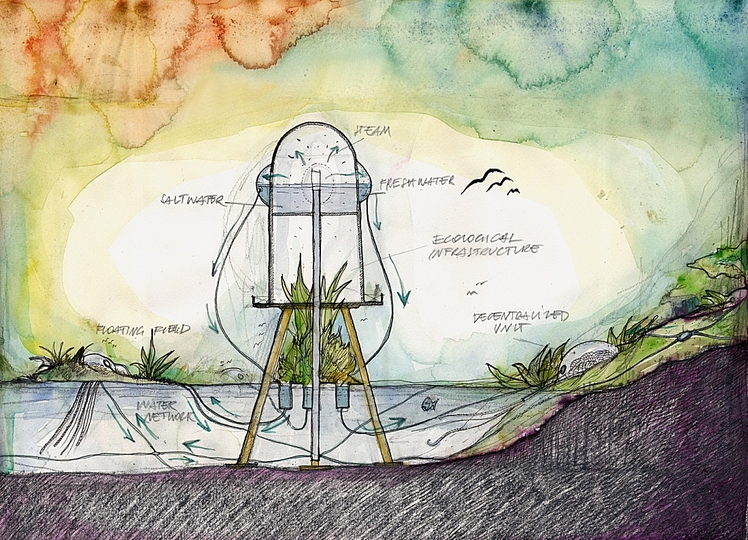 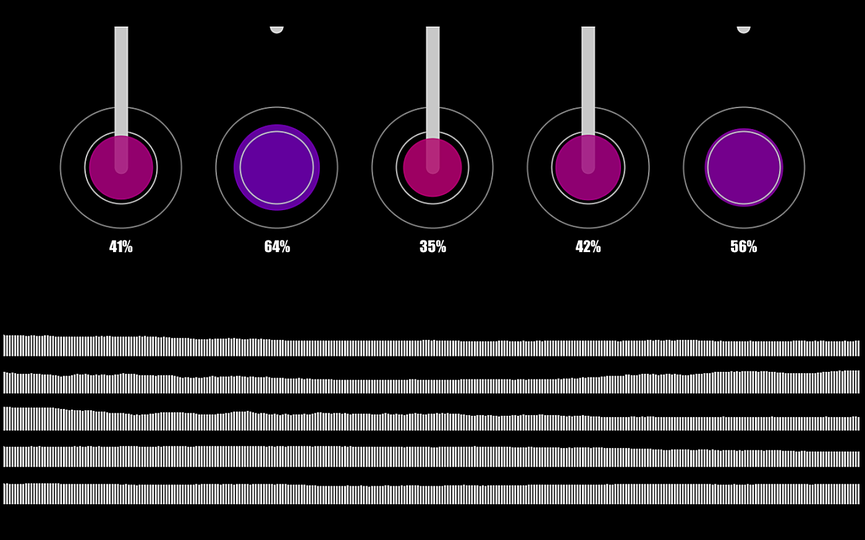