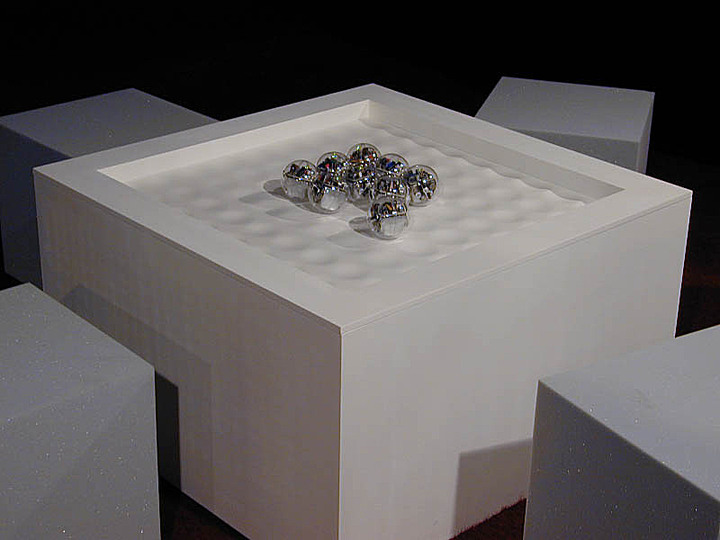 & collect
Since 2001 The artist duo //////////fur//// (Voker Morawe/TilmanReiff) creates multi-sensory artefacts related to the construction and social aspects of computer game culture. Their interactive installations combine game-logic, media criticism, apparatus parody and childhood memories into engaging man-machine experiences, oftentimes altering the view on the relationship between man and technology. Beside the main artistic question of alternative user interface humor, group experience and hormones are the key points of their work.
Volker Morawe, Dipl. AV, born 1970 in the north of Germany, grew up in a sheltered small town close to the city of Bremen which is famous for its coffee and beer production. Passing through several schools, job training as space electronics technician, participant of second-chance education, hit producer, design student, from 1999 to 2004 student at the Academy of Media Arts Cologne. Major field of study: multisensoric interfaces in game context.
Tilman Reiff, Dipl. Inform. (FH), Dipl. AV, born 1971 in Duesseldorf, Germany, spent his childhood in the fatherly electronics laboratory and on offroad bicycles in the construction sites of Ratingen-Homberg. After a rebellious school carreer he left Munich to study computer science and media at the University of applied sciences in Furtwangen, followed by a postgraduate study at the Academy of Media Arts Cologne. Major field of studies: interaction design.
share Weapons of Mass Distraction
g t l v w f
penccil.com/gallery.php?show=9684 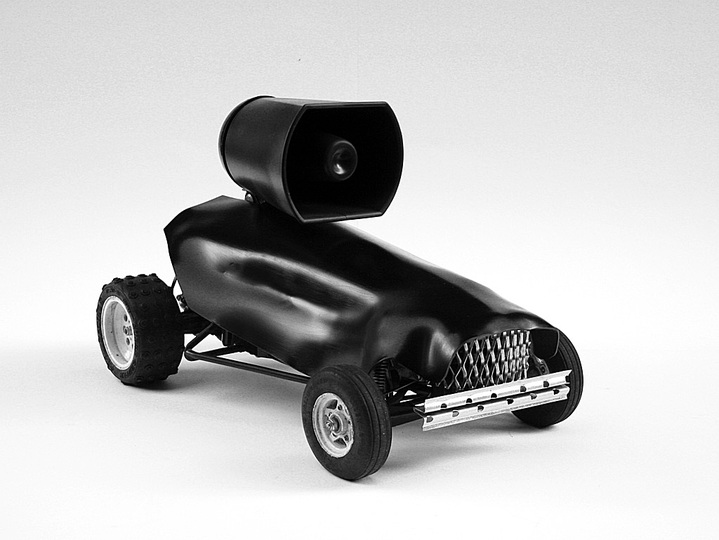 The Earworm Assault Devices (EAD) are a set of weapons for the propagation of highly infectious sound or music (earworms). Sound is unavoidable (the ear can’t be shut like the eye) and evolutionary hardwired into our cognition apparatus, it can reach into the subconscious and arouse emotions. A well made sound can get stuck in the head of the hearer and loop for a varying time span. The infected person oftentimes repeats the sound involuntarily by singing, humming or whistling, eventually spreading the earworm like a virus. Messages can be modulated onto earworms like radiowaves on a carrier frequency, as a result earworms can be used to distribute messages or manipulate the individual. This fact is recognized and commercially exploited in various fields of modern life – like pop music, cellphone ringtones, audiobranding or elevator music to name a few. Global brands are using huge budgets to propagate their earworms by means of multiple costly channels, the respectable citizen remains defence- and powerless. Until now: The Earworm Assault Devices (EAD) enable individuals or small groups to distribute their own earworms. Small pieces of highly infectious sound or music can be recorded onto the devices and fired at single or multiple persons, eventually spreading your message out into the world. They come in different shapes and sizes and are affordable for small budgets. 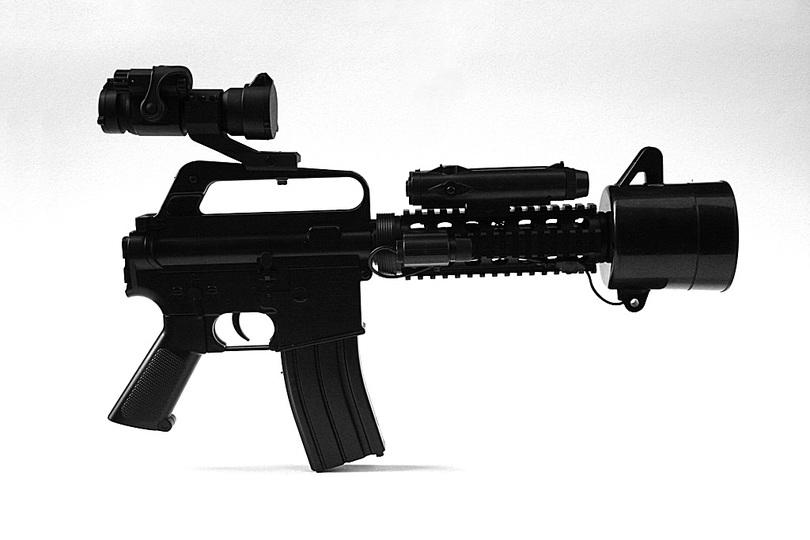 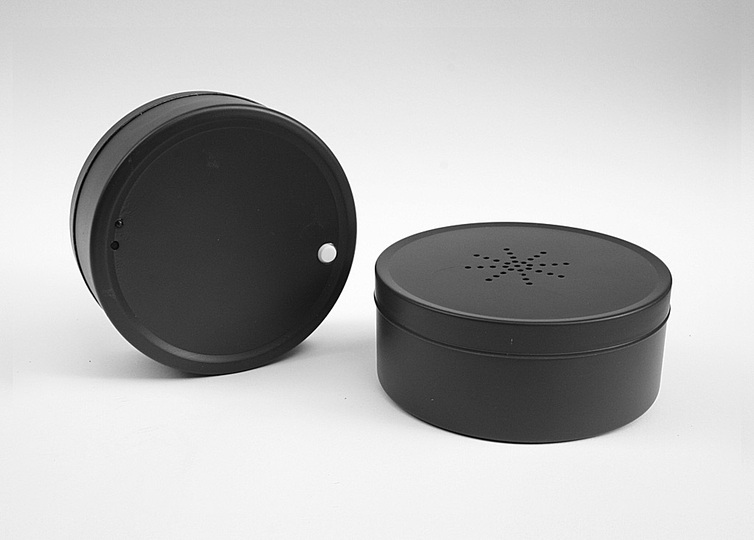 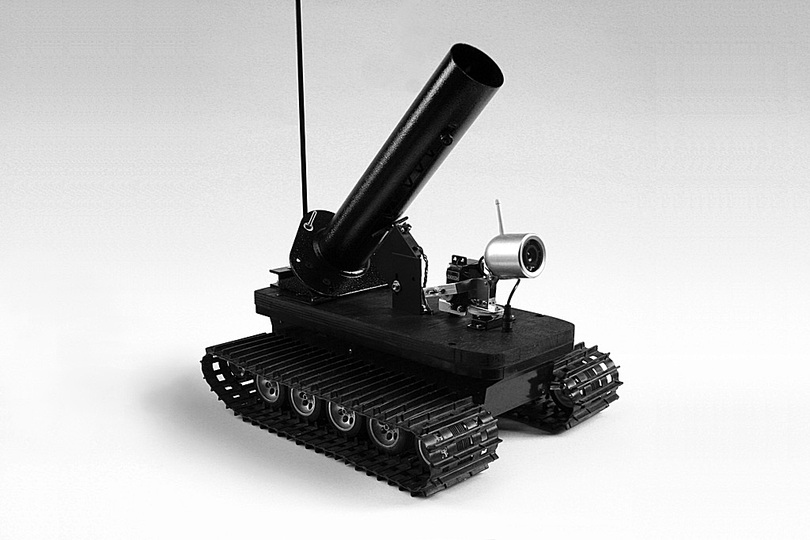 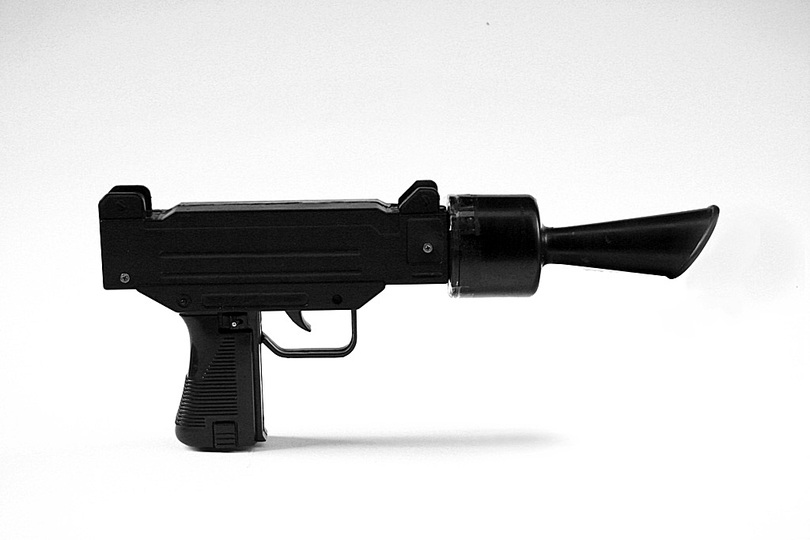 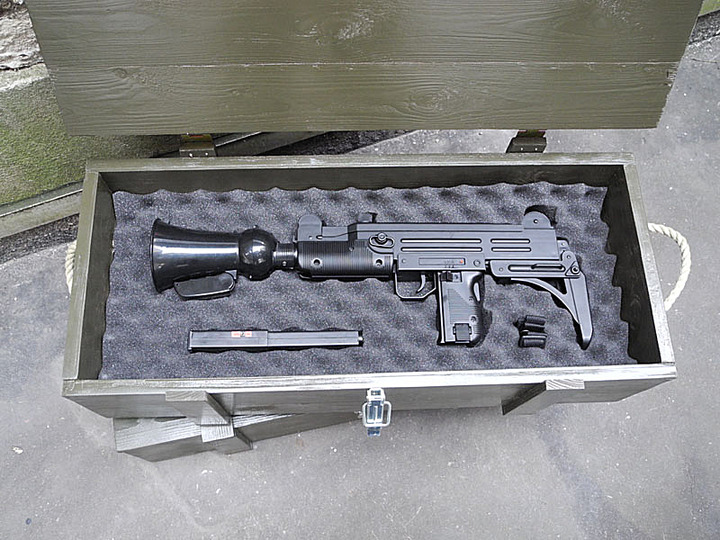 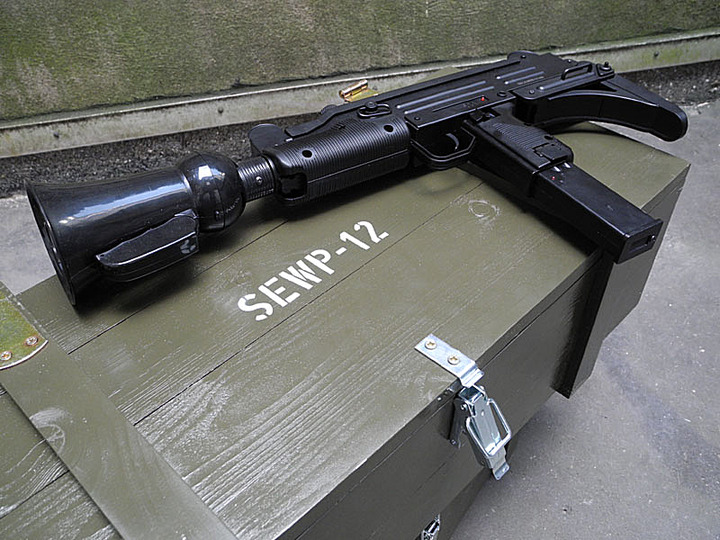 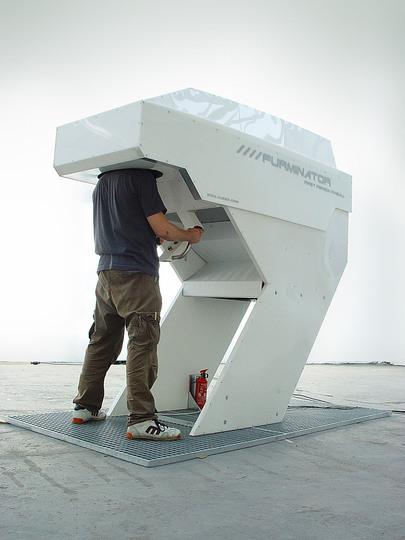 The ////furminator is a pinball machine that puts the player in a first person perspective similar to modern “EGO Shooter” video games. Like being inside a huge VR-helmet, the player’s head is stuck into the ////furminator capsule. His nose is situated right behind the flipper fingers, only centimeters away from the ball. Sealed off from reality and with his head arrested inside a force-feedback-helmet, the sound- and lighteffects, the mechanical noises of the pinball and the absorbing perspective create a highly immersive mechatronic environment. In the traditional pinball perspective – looking at the playfield from above – the perception of the gameplay is almost two-dimensional. The ////furminator however unifies the origin of visual perception and the physical vanishing point of the ball. Ceaselessly the ball is rolling towards the player’s face which is protected only by a small plastic screen. The high velocity of the approaching ball poses a constant threat to newbies, but the experienced ////furminator pilot will quickly appreciate the improved aiming possibilites the perspective provides. The main idea behind behind the furminator was to create an immersive space which does not rely on computer generated images. Nowadays, the term “virtual reality” is instantly associated with rendered 3D graphics, projected onto walls surrounding the spectator or displayed on head-mounted LCD screens. Not only do most of these synthetically generated environments look non-real, they also leave most of the spectator’s senses outside in the real world. By combining the perspective of an EGO-shooter with a mechanical pinball machine the ///furminator creates a “virtual reality” that incorporates the full body of the player. The “man against machine” setup provides an unparalleled experience and the interaction is not limited to pushing buttons: the whole body can be used to move and tilt the pinball until the ////furminator admonishes you to “chill out”. 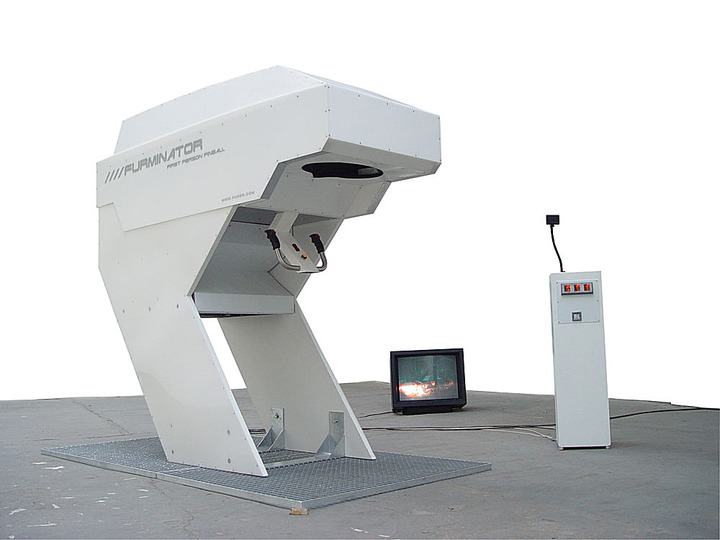 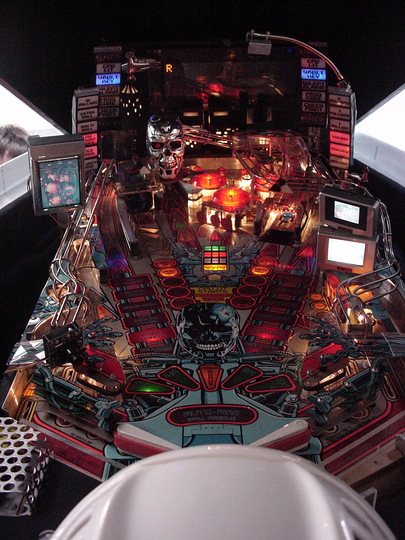 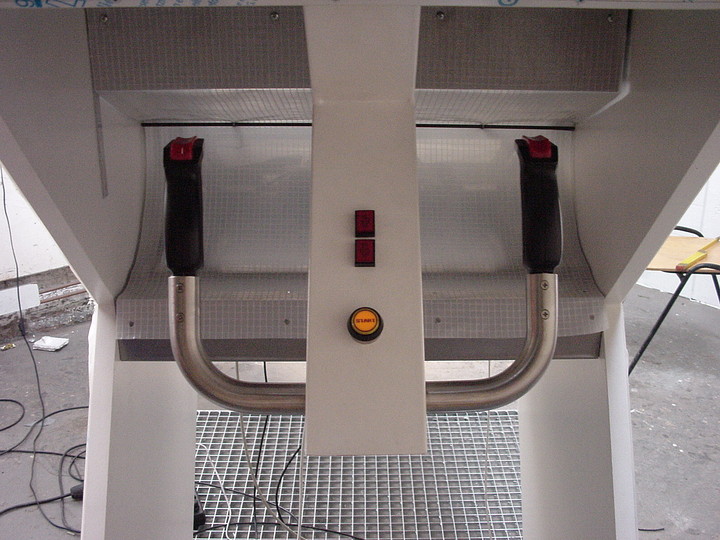 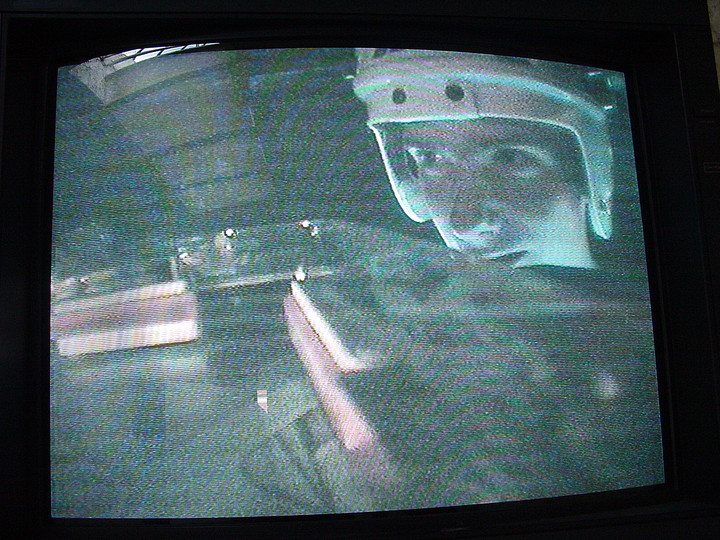 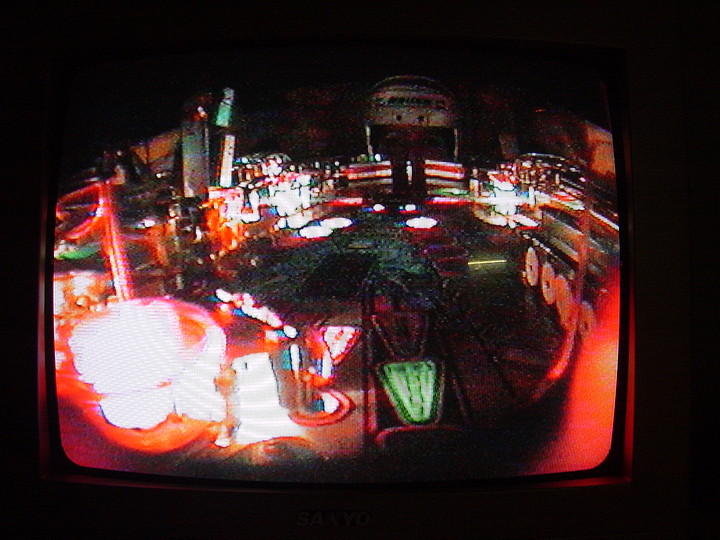 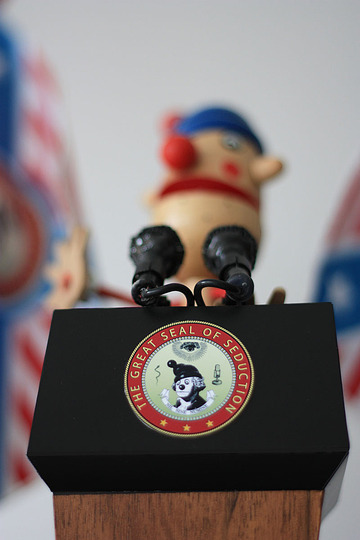 the ////furer//// is a universal speech reciter. Up to 7 speeches of the worlds history most eviliest despots,important political and relgeous leaders, charismatics Gurus and unscrupulous Dictators can be uploaded to the installation and will be recited by this palm-sized puppet with lip-synched voice output and hand gesture. The power of words has always been an instrument to manipulate people. In a good way but also in a bad way. Did you believe Colom Paul presenting the US war plan at the UN? In the politics, religeous and buisiness world charismatic leaders can easylie change the mind of people. Why do people get crazy when a CEO of a big computer company is presenting a new product? “Mein Führer” is an instrument to listen to speeches in a neutral way which helps you to think first before believe because the great seal of seduction is everywhere! 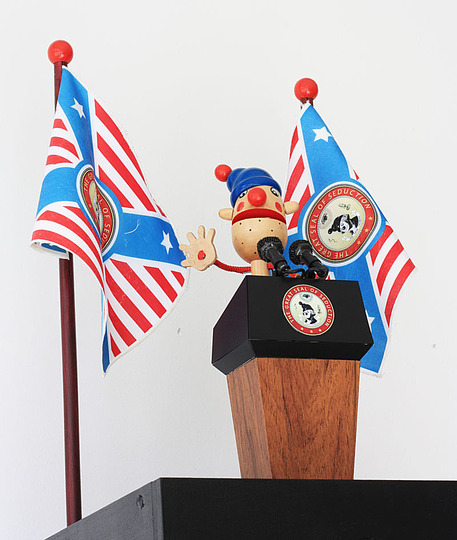 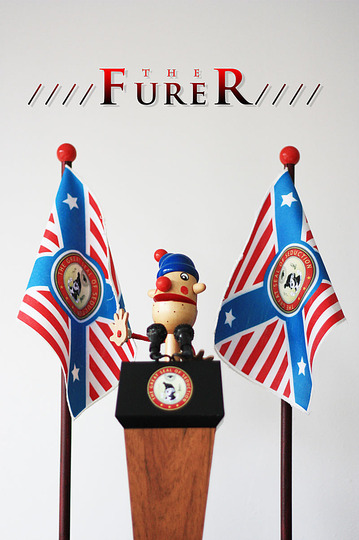 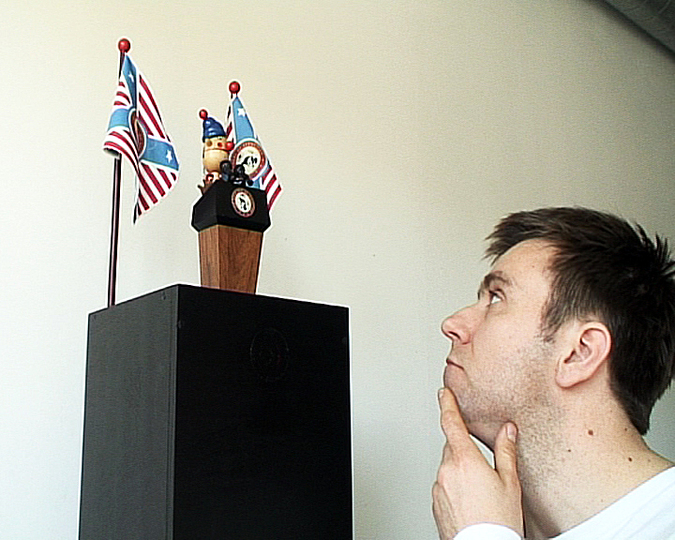 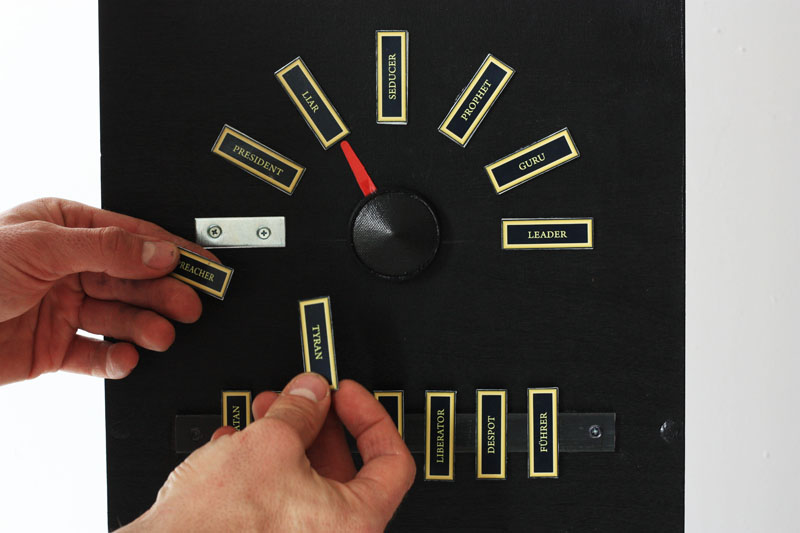 Friends: How many of them do you have? On facebook the „how many“ seems to be more important then the „who“. For some facebook users the amount of friends seems to be an indicator of their own popularity. But how can you have a deep relationship with hundreds of friends? It‘s just impossible! facebox is the world’s smallest social network. It is an artifact to rehabilitate social network geeks, an ironic statement to the massive increased social network madness. It‘s time to make a change: Erase your facebook account today and switch over to facebox! With facebox it‘s easy: By stucking your head into one of this old computer monitors you will dive into this real world network. Find a friend and talk to him in a intimate face to face situation. facebox provides everything a former social network addicted persons needs to reactivate his social skills which are necessary to have an intense human to human conversation: 1. conversation stimulating computer controlled trustfully moderator voice 2. facebook like interior and screen design 3. cosy illumination concept 4. highly emotional music 5. close distance intercom system But the most important is that no data will be stored or used by third party. 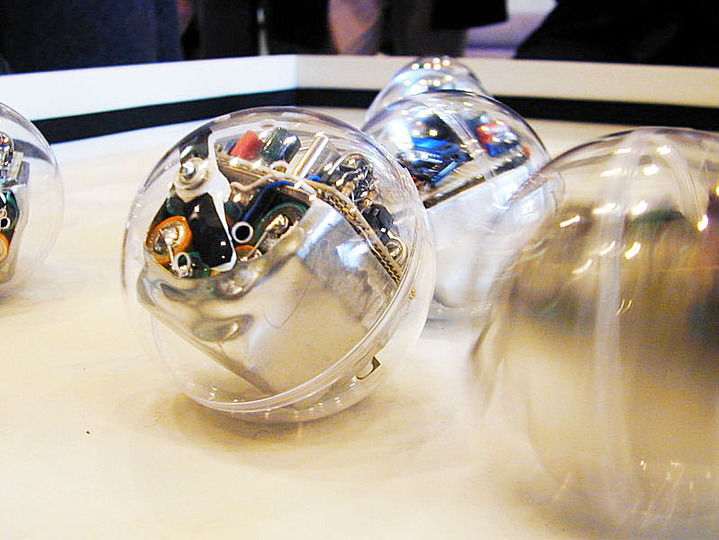 HMV is a board game. The players can move semi-autonomous ball robots by making sounds. Form and gravity collude with voice, board and chance. Each ball listens to a certain pitch and starts to move if the right frequency was hummed or sung. The initial setting does not provide rules. The players get involved and slowly experience strategies and goals. 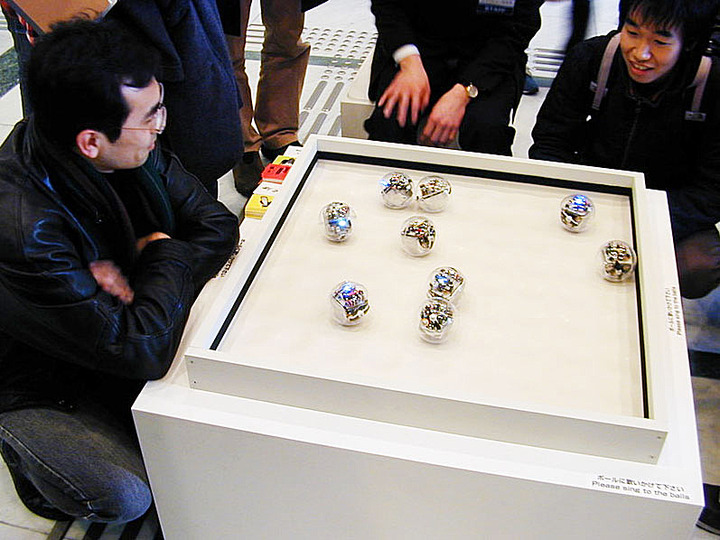