& collect
MINDCRAFT is an exhibition concept showcasing some of Denmark's most talented craftspeople and designers. The curated exhibitions demonstrate the qualities, potentials and versatility of new Danish craft and design. The MINDCRAFT exhibitions are organized by the Danish Arts Foundation and the Danish Agency for Culture (2008-2013 organized by Danish Crafts). MINDCRAFT14 is presented in Ventura Lambrate during Milan Design Week 2014. The exhibition presents a carefully selected group of Danish craftspeople and designers with a diverse range of skills. MINDCRAFT14 is curated by Nina Tolstrup.
Exhibition: April 8-13, 2014
Address: Via Ventura 6, 20134 Milano
share Mindcraft 14 Milano
g t l v w f
penccil.com/gallery.php?show=8377 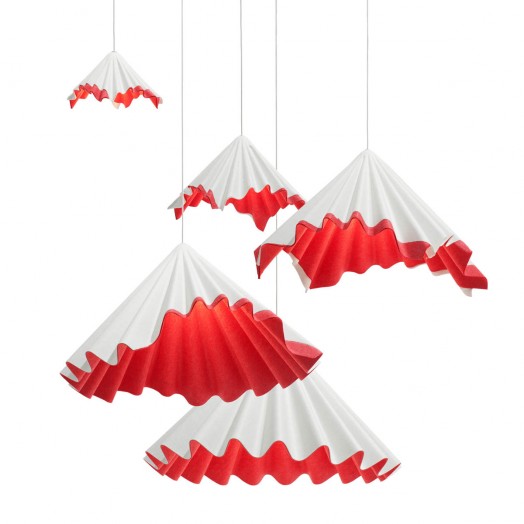 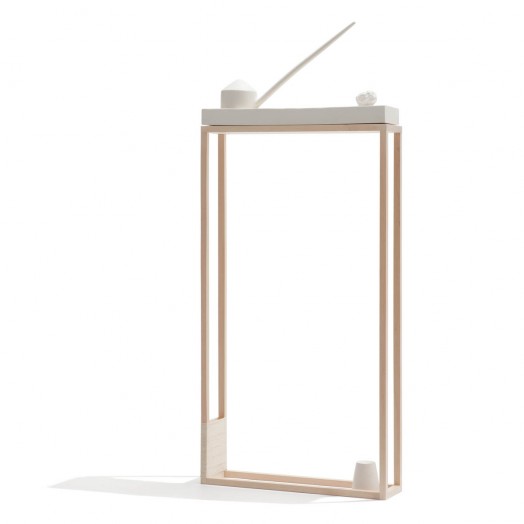 Untitled#3 The work consists of two ceramic objects displayed on a clay podium. The composition is displayed on a hand-built ‘furniture suite’ made in wood. The piece as a whole is a non-functional sculpture where the individual forms interact to create a coherent whole while simultaneously challenging each other. The forms are inspired by familiar everyday objects, which acquire new dynamics and energy when combined. Suspension I The strategy revolves around the art of the possible; the process is one of crossing boundaries and bringing worlds together in order to gain new ground. Suspension I is a trial version of a larger format than before. The size and the glass as material is stretched to its limits. In a unique approach, Pipaluk Lake creates a system of metal wires to tie large sheets of glass together. The many thin wires form a mesh that is strong enough to be suspended in the kiln. The glass moves through the holes of the mesh as gravity pulls on the heated material. The metal wires create relations on several levels: between metal and glass and between cold and heat. Physically, the wire also represents the impact of mind in combination with craft, a connection between the conceptual and the sensory realm. After the firing, the wire that framed the form-giving process now appears as an integral part of the expression of the finished object. 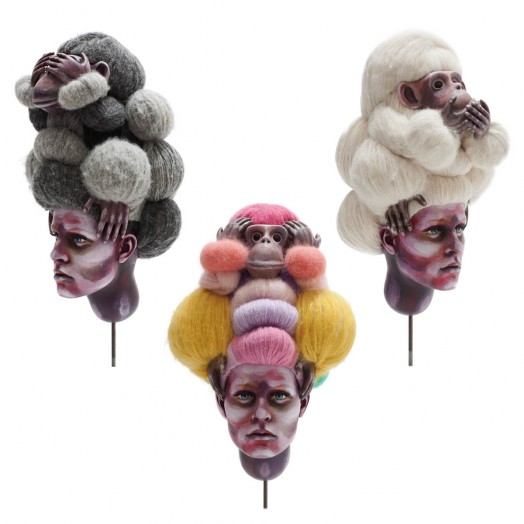 The Dance of the Deaf and Dumb Eye. With inspiration from the classic Japanese monkeys, which have been interpreted in the West as a naive attempt to shut out the outside world by refusing to see, hear or speak, these clothing sculptures contain visual references to the French court under Louis XVI, during whose reign excessive abundance and poor communication between nobility and citizenry led to the French Revolution. With this in mind, the monkey trinity is drawn into a contemporary rococo, where globalization is skewed by imbalanced capitalism, dangerous balances of power and a stubborn struggle between religion and freedom of speech. The monkeys become narrative symbols of today’s blind consumers and the historical Marie Antoinette. 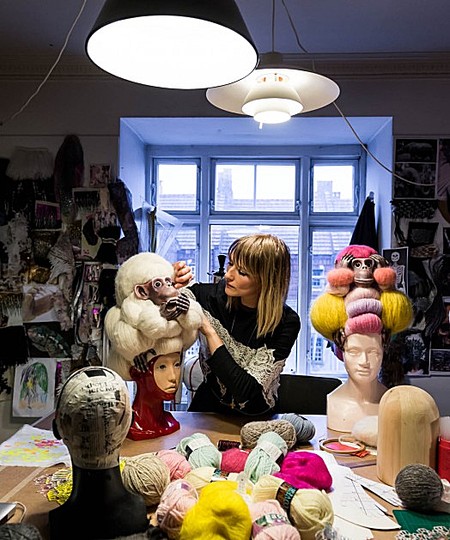 Flower Arrangement consists of modelled plants made in glazed stoneware and combined in an artificial arrangement. In Flower Arrangement, Marianne Nielsen interprets a traditional source of inspiration, as flowers are a classic motif in the craft tradition. The emotional significance we attribute to flowers makes them particularly interesting for Marianne Nielsen to explore. The imitation of plants incorporates the contrast between nature and culture; the portrayed and the portraying. The works are more about manmade artefacts than about nature; the natural motif is used to highlight the material and the ceramic tradition. 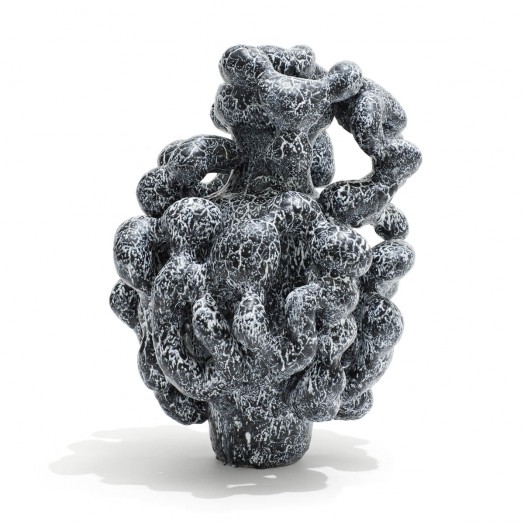 Horror Vacui – the fear of empty space – is a collection of ceramic works that embraces ceramics history and reinterprets classic virtues in the ceramics tradition. The works in the collection are all archetypal jar shapes, excessively encircled by wildly unruly three-dimensional ornaments. The works may be viewed as a sheer beauty and a tribute to the many faces of glaze and clay, which, in its fired form, inscribes itself in eternity. Elements is a dress rail constructed of multiple identical elements. The user can alter the size by increasing or reducing the number of elements, thus shrinking or expanding Elements to match the current need. Elements is made of steam-bent ash wood. The wood is steam-heated, which makes it elastic and pliable. When it dries, it keeps the new shape. The inspiration came from various steam-bent products, including wooden snow shoes, a Greenlandic kayak and the wooden handle on a teapot. Line Depping has used steam-bent components in several of her projects and is fascinated with pliability of the wood when it is exposed to steam. Line Depping has also worked with other techniques to bent wood. In 2012 she used precompressed ash wood to make Hook, a coat hook that she designed for MINDCRAFT12, and which was subsequently put into production by the design manufacturer WRONG FOR HAY. 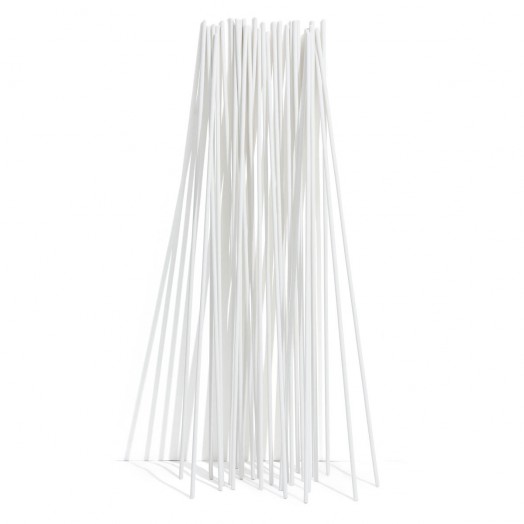 Kristine Tillge Lund’s MINDCRAFT project is a site-specific, material-based study. Porcelain is commonly perceived as a precious material. The utilitarian porcelain objects that we use on a daily basis are often expensive and fragile; they are objects that we handle with care. This fragility, which is one of the most prominent and familiar qualities of porcelain, invites a particular behaviour in our day-to-day interactions with the material. Fragility is also the key quality and the point of departure for this piece, which consists of 600 porcelain rods leaning against two opposite walls. The installation presents a fragile material in a precarious set-up. The rods are as tall as an average adult. Every year, the exhibition attracts thousands of visitors, which makes it a perfect place to carry out an experiment aimed at tracking how the visitors’ behaviour is affected when they suddenly find themselves in an entire room that is precarious and fragile. How does it affect their movements and everyday behaviours such as walking, standing and gesticulating to be surrounded by all this fragility? The long porcelain rods were extruded and then dried slowly while being adjusted daily, before they were finally fired at Tommerup Keramiske Værksted on the Danish island of Funen. 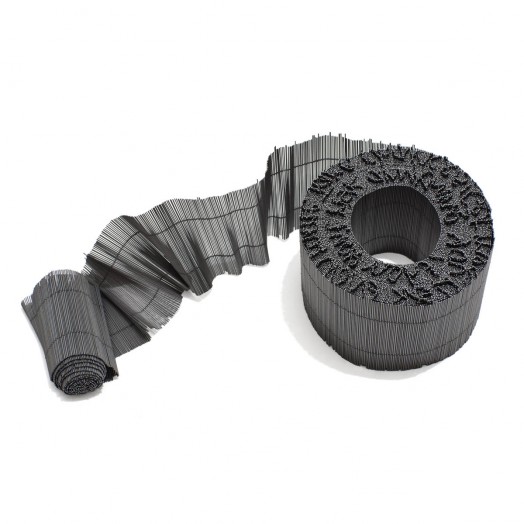 iLoveLetters A bracelet or a long “ribbon” of pencil lead stitched/woven together. The work was inspired by reflections on the way the computer has been taking over our written communication. Hand-writing is an important part of a person’s history and identity – from the tags on childhood birthday presents, mom’s shopping lists or dad’s corrections in one’s homework to postcards and hand-written (love)letters, which have now become a rarity. We are increasingly missing out on encountering other people’s hand-writing. We might perceive computer writing as impersonal and lacking in poetry, but perhaps it is simply a different form of poetry than the expression we associate with hand-writing? The idea behind “iLoveLetters” is to link or weave different forms of languages/codes together and debate the way we perceive and relate to them. 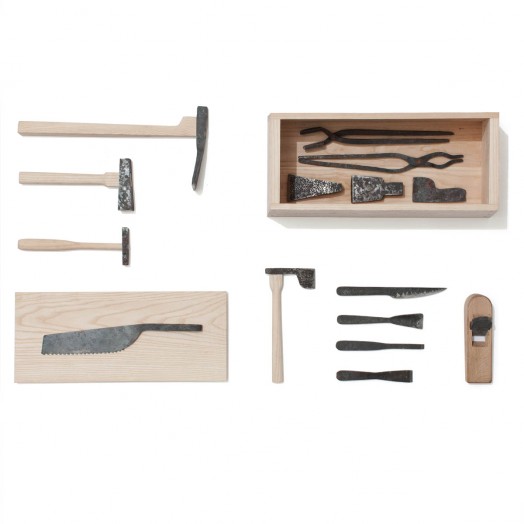 Tools consists of hand-crafted woodworking tools – saw, plane, knives, axe etc. – and a wooden toolbox that is made up of the tools that it stores. In some crafts, craftspeople have traditionally made their own tools. The Viking age Mästermyr tool chest found at Gotland is an example of this tradition. The chest contains woodworking tools as well as tools for working in copper and iron. As a furniture designer, Jakob Jørgensen has always worked with wood. He has his own woodworking shop with all the basic power tools: circular saw, planing machine, band saw etc. Machines that are a result of the industrialization, and which enable modern mass-production. Jakob Jørgensen has experience with building prototypes and staging small-scale productions of his design ideas in his workshop. For the MINDCRAFT14 exhibition ‘Materializing beliefs’, his ambition was to dig a little deeper to explore the material and the craft that form the historical basis for woodworking before the days of modern manufacturing: steel and the art of tool-making. For this exhibition, Jakob Jørgensen learned to make the basic hand-tools that are necessary in woodworking – embracing the tradition of a craftsman who makes all his own tools. 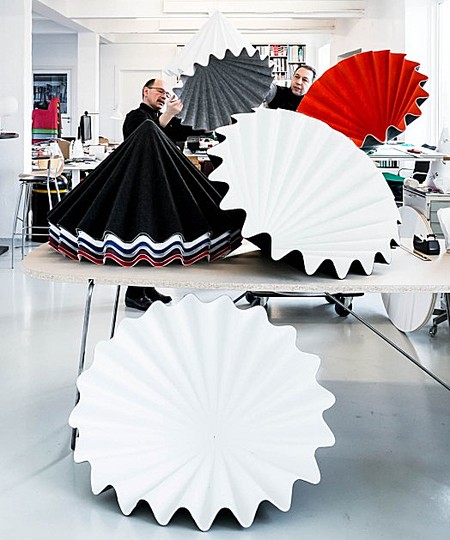 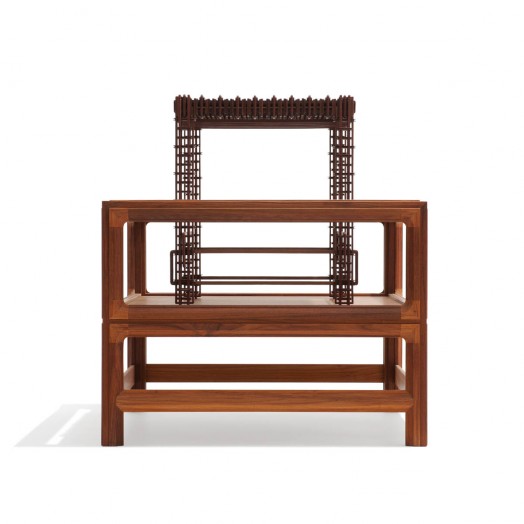 Completely Dusty is composed of structure provided by benandsebastian and dust provided by Thorvaldsen’s museum where it was first exhibited. Completely Dusty is an incomplete prototype; it has not reached its full potential without the time taken for dust to settle into its underlying surfaces. The grooved walnut latticework and leather bindings of the piece both harbour dust and are fragile enough to be threatened by the delicate use of a feather duster. While dust slowly unsettles the obsessive order of the piece, attempting to thoroughly clean the piece would most likely lead to the work’s collapse. The piece both accommodates and defends the dust that we try to eliminate from our lives through clean lines and frictionless surfaces. The hybrid piece reflects upon Thorvaldsen’s dust-friendly sculptural language at the microscopic scale of the dirt particles that its forms attract. 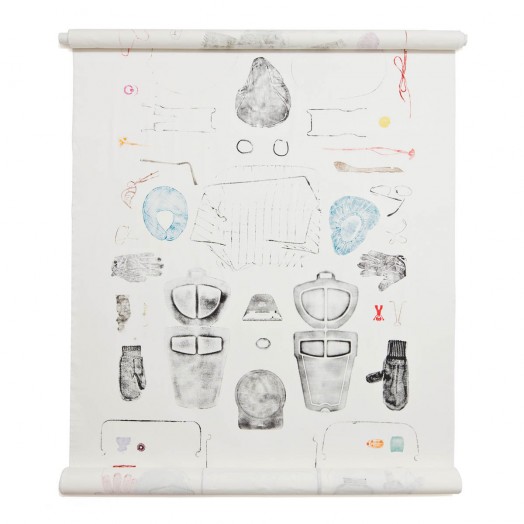 Street Print is a 1.5 x 10 metre length of cotton satin with prints of objects found in the street. The prints are reproduced in a composition with a central axis and a certain degree of pattern symmetry around the axis. The composition was inspired by English etchings from the 1600s depicting natural objects in more or less symmetrical compositions. There is a print of each object. The colour is kept as close to the original as possible. If the original has two colours the print is made in a blend of the two colours in the same ratio as in the original objects. The actual found object is included as a repetition of the print version, like a twin on an independent ‘track’. The objects in the Street Print collection were found over a period of 1- 1½ years. Anne Fabricius Møller is fascinated with the degree of detailing that emerges in the prints of the found objects. The objects are placed on the fabric in the desired composition, and reactive textile dye in the colour of the found objects is applied to the fabric. Once the printing is complete, a fixing effect is achieved through damping and the fabric is washed and ironed. Anne Fabricius Møller began to collect lost and abandoned objects more than ten years ago. Since then, she has noticed that certain objects have more or less disappeared, while others have appeared. Thus, the found objects reflect their time. Steel wire has been replaced with plastic strips, while handles from bicycle baskets have emerged as a new item. Another observation is that the objects are predominantly in primary and secondary colours, while the more poetic colours are present in the non-designed objects, rusty items, bleached, worn, anonymous and natural objects. Street Print for MINDCRAFT14 is the result of Anne’s recording of people’s losses, her own bicycle rides around the city and her collector’s gene. Many of the objects have been run over, and they are coarse and filthy, but their imprints are remarkably poetic and delicate. The fine quality of the fabric strikes a contrast to the coarse grey asphalt where they were found.

The Birth of Marilyn They float in the room, light and flaunting, like a skirt lifted by the wind… First, a little sculptural sketch, an idea that grows and takes on its own natural shape until it finds its final form – “correct” and well-controlled. The Birth of Marilyn is a story of creation/genesis – from a timid beginning through the imperfections of experiments and attempts to the final work: a big, floating lampshade. The development process and production method are the actual artwork, as the different phases of experimentation with the mould become a series of unique products. The lamps are produced by using thermoforming/moulding in the Match tool. The duo Iskos-Berlin is inspired by experimenting with materials and production technologies, the sensuality of the material and its natural shapes and the associations that are sparked as they work with and study the materials – as wavy as the seashell from which Venus was born or as pleated as Marilyn’s skirt, lifted by the air… They strive to develop products using rationalized production processes to achieve the rejection-free, undemanding industrial production of unique products with a minimal waste of materials and other resources.